The 2018 Farm Bill is set to expire in September 2023, and Congress and advocates have already started their work to prepare for the next one

But What Is the Farm Bill and Why Does It Matter for Kansans?

The Farm Bill is an omnibus budget bill, meaning it bundles the governance and budgets of various programs and industry sectors. It allocates both mandatory funding, which is guaranteed program spending, and discretionary funding, which is funding that must go through annual appropriations to determine the spending amount.

The first farm bill was the Agricultural Adjustment Act of 1933, passed as a response to a struggling economy in the wake of the Great Depression and the Dust Bowl. The goals of the legislation were to ensure that the price of food was fair for both farmers and consumers and to maintain an adequate, balanced food supply to combat the surplus of some commodities.

The bill created programs to reduce crop surplus and raise prices, such as farmer subsidies in exchange for reducing the production of certain excess commodities. This set the stage for one of the main functions of all future farm bills, which is support for the country’s farmers.

Farm bills do not only allocate spending, but they also determine the policies within each of the legislation’s subject areas, such as how research programs are chosen to be funded, soil preservation requirements, and rules and regulations for farmers across the country. Farm bills are renewed about every five years and contain 12 titles relating to commodity programs, conservation, trade, nutrition programs, credit, rural development, research, forestry, energy, horticulture, crop insurance, and miscellaneous matters.

While all of the Farm Bill titles affect Kansans in some way, as well as the state’s economy, the Nutrition title is directly related to KAC’s work to ensure all families have enough to eat for every meal.

The Nutrition title guides federal spending on food assistance for low-income households, including the Supplemental Nutrition Assistance Program (SNAP), The Emergency Food Assistance Program (TEFAP), and the Food Distribution Program on Indian Reservations (FDPIR). These programs are highly effective and far-reaching, so the title makes up the majority of farm bill spending. In the 2018 Farm Bill (officially the Agriculture Improvement Act of 2018), about 76 percent of spending was allocated to the Nutrition title.

In addition to how much is spent on these programs, farm bills determine the policies that guide their administration and the impact on those who utilize them. For example, with bipartisan support, the 2018 Farm Bill required that the U.S. Department of Agriculture secretary re-evaluate and update the Thrifty Food Plan dollar amount every five years using dietary guidance, food prices, and consumption patterns. Because the Thrifty Food Plan determines how SNAP benefits are calculated, these regular updates mean that SNAP households will receive a benefit amount that more accurately reflects the actual costs of putting food on the table with a more adequate grocery budget.

The Farm Bill and Kansas 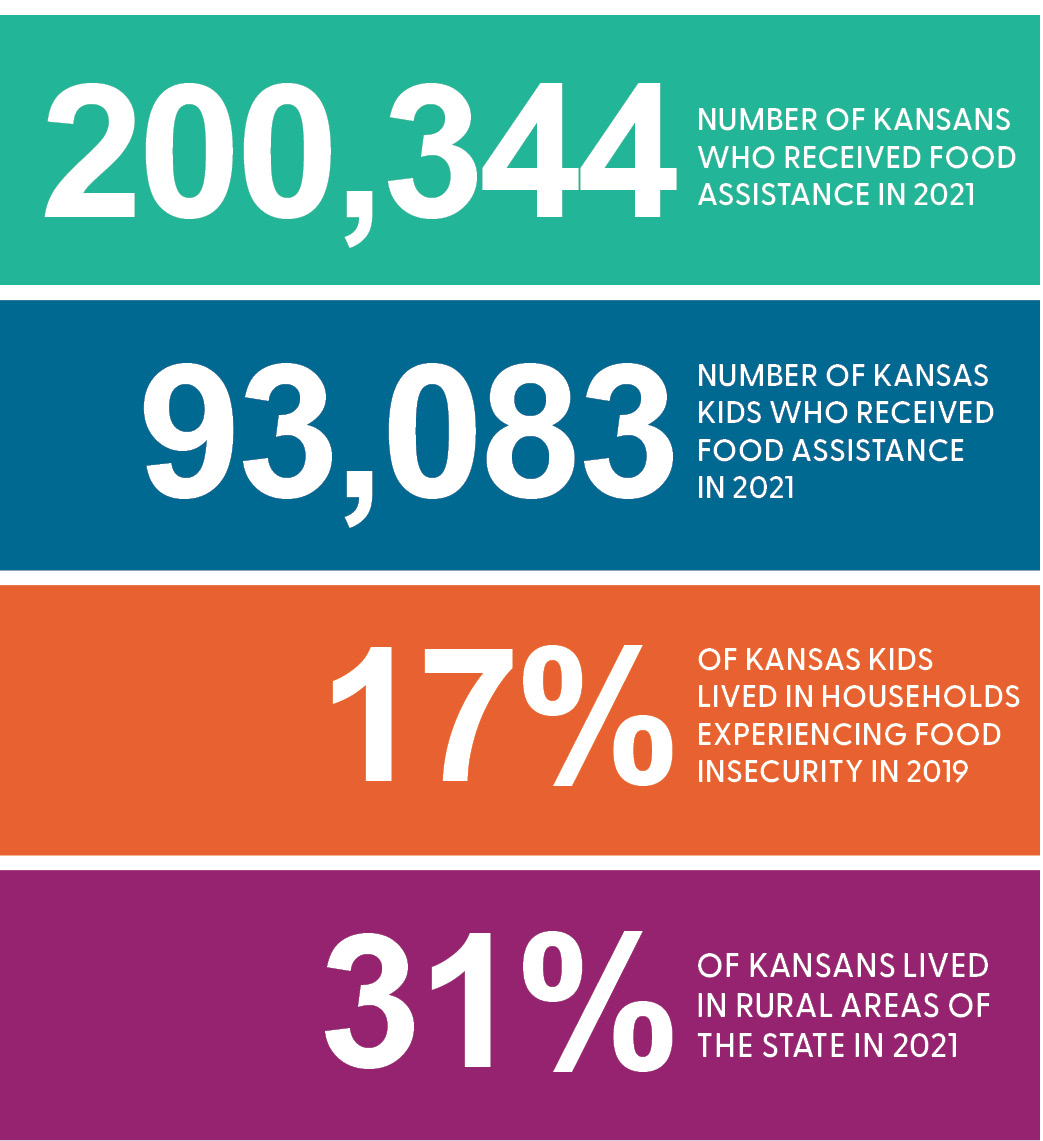 In 2021, 200,344 Kansans and 93,083 children received SNAP benefits, called food assistance in Kansas. Before the pandemic, 17.1 percent of Kansan children lived in households without consistent access to enough food. The Farm Bill’s Nutrition title determines how anti-hunger, anti-poverty programs operate and keep food on the table for thousands of Kansas families experiencing food insecurity.

The Nutrition title is unfairly characterized as taking away funding from other titles. But in reality, all the titles work well together to stimulate the economy, keep families fed, support farmers, and conserve the land needed to produce food.

The entire Farm Bill greatly influences the economy and changes in size and scope along with economic need. This means that the programs and services determined by the Farm Bill are working as intended. Just as farmer and rancher safety net programs expand in times of greater need and contract during times of greater prosperity, so too do the food assistance programs in the Nutrition title.

This structure ensures that the titles are mutually beneficial. For example, the expansion of fresh produce incentive programs for low-income families increases spending at farmers' markets. Additionally, making it easier for retailers to accept SNAP increases low-income households’ food access along with spending in local stores. Balls Food Stores chief operating officer testified before the U.S. House Committee on Agriculture earlier this year that strengthening SNAP is valuable to grocery stores. He noted that in 2020, SNAP supplied almost 200,000 grocery industry jobs and more than $6.7 billion in wages across the country.

The agricultural titles in the Farm Bill also have a large impact on the Kansas economy. Agriculture makes up about 42 percent of the state’s total economy and 13 percent of the state’s jobs. The Kansas Department of Agriculture notes that serving the state’s farmers and ranchers requires collaborative work on Farm Bill elements. Federal lawmakers who were instrumental in passing past farm bills also emphasize the importance of collaboration. It has been stated repeatedly that getting legislation across the finish line requires a Nutrition title as strong as the direct support for producers.

The Farm Bill also addresses difficulties of rural living that about 31 percent of the Kansas population experience. This makes the Rural Development title particularly important to Kansas. Historically, this title has included broadband access policy, energy for rural areas, infrastructure, and housing, among other things.

Also critical for the development of rural Kansas is the strength of SNAP, which bolsters the nutritional and economic health of these communities. Food assistance dollars added to rural families’ budgets help offset additional expenditures from greater transportation costs to access food and health care or broadband service gaps that make it harder to find education and employment opportunities. And because the food and farm industry tends to be a larger aspect of rural economies, additional spending on food impacts those communities to an even greater extent than metro areas.

The Senate Committee on Agriculture, Nutrition, and Forestry and the House Agriculture Committee (each of which has federal lawmakers from Kansas as members) have already started holding hearings on the 2023 Farm Bill. They are hearing testimony from anti-hunger advocates, farmer and rancher groups, food industry interests, grocery stores, and more. They will continue to hold listening sessions and review the 2018 Farm Bill as they each draft their versions of the next bill.

Next, the full Senate and House of Representatives will hear their respective committees’ versions, present amendments, and vote. Leaders from the Senate and House committees will then meet to compromise and combine their versions of the bill. Finally, the full chambers will vote on the agreed upon bill, and the 2023 Farm Bill will be sent to the President’s desk to sign.

This process may be disrupted and repeated at various points due to competing priorities and political influences, and there may be misleading rhetoric surrounding the cost of the Nutrition title and its relationship with the rest of the Farm Bill. We hope to see advocates for anti-hunger measures and farmer and rural supporters come together to push for a Farm Bill that will benefit all Kansans, regardless of income or zip code.