Building a Budget for the Future

Higher gas prices, elevated inflation, and overall economic uncertainty across the world have caused speculation at home and abroad that a recession is possibly on the horizon. While Kansas brought in $127.6 million more in tax receipts than estimated in the first month of the new 2023 fiscal year (with corporate tax receipts performing particularly well), changes in the national and international economy could still be a hard blow to the state. One tried and tested way to stay ahead of the impact is building and sustaining a strong rainy day fund.

What’s a rainy day fund and why is this a big deal?

A rainy day fund is designed to set aside and save money from good economic times to protect vital state operations in case economic downturns cause revenue shortages. They are a reflection of intentional policy choices by lawmakers to ensure that agencies providing crucial programs and services for many Kansas families can keep working through budget stresses.

The Kansas rainy day fund, known as the Budget Stabilization Fund (BSF), has mostly sat empty since it was created at the start of FY 2017. State law authorizes half of the collected tax revenue that is above the state’s official estimates to be transferred from the State General Fund (SGF) to the BSF on the last day of the fiscal year.

Rainy day funds vary by state, but for several years running, Kansas was amongst the handful of states with less than one week’s worth of operating costs in rainy day savings while the median for all states in FY 2021 was 34.4 days. Previous economic downturns resulting from the 2008 recession and disastrous tax policy in 2013 forced lawmakers to make detrimental cuts to agency budgets and divert money from other funds to avoid a budget deficit. The state was poised for the same fate as the COVID-19 pandemic began. 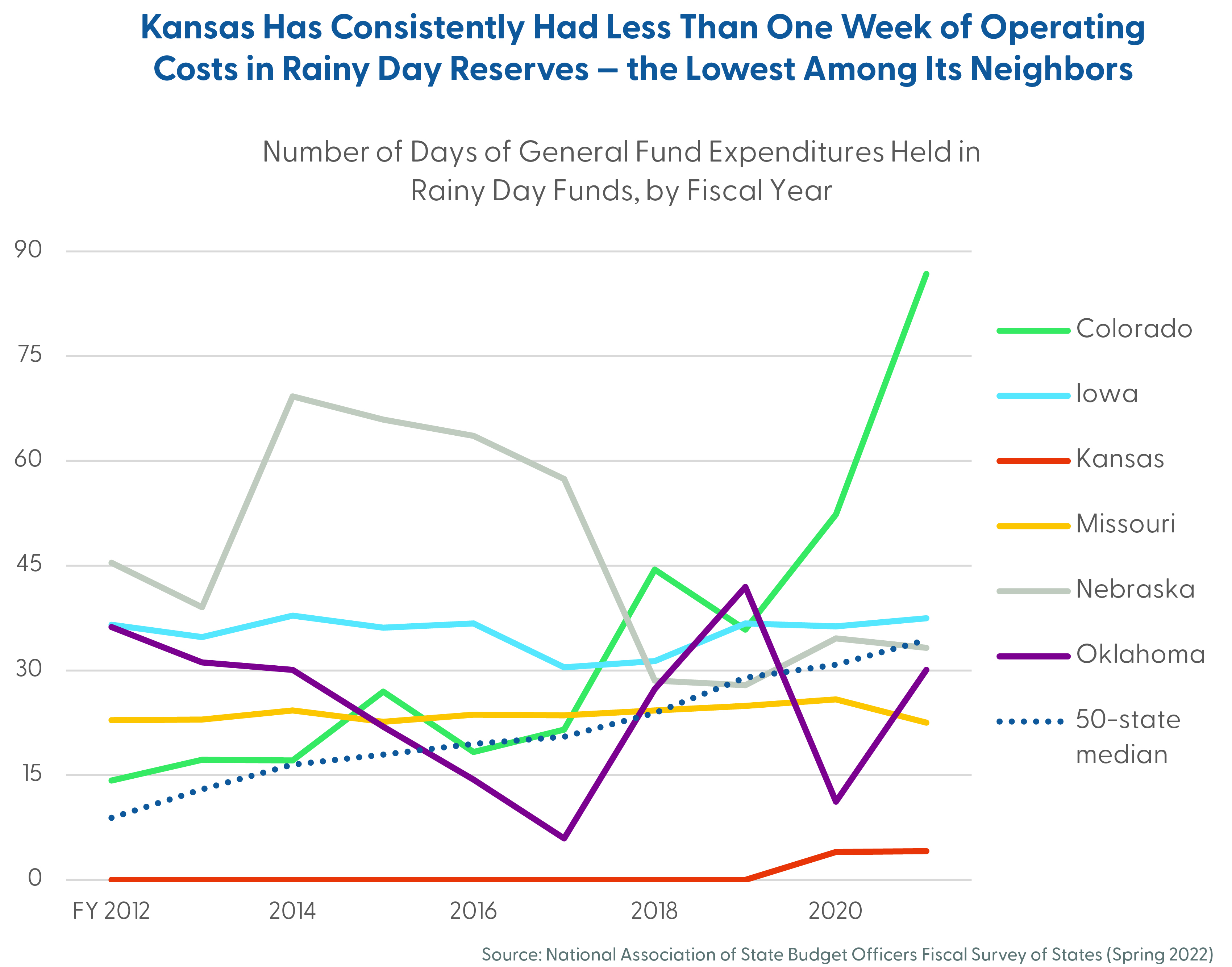 Thanks in part to historic federal pandemic relief that a) enabled states to spare general fund dollars, b) kept businesses open, and c) put money in the hands of consumers through federal stimulus payments, many state budgets, including Kansas’, saw large revenue surpluses in FY 2022. This presented a critical opportunity to prioritize the state’s rainy day fund to set the state up for future financial stability and the flexibility if (or when) the economic tides turn.

By design, the proactive approach of a rainy day fund - versus reactively rummaging the coffers in times of crisis - would put aside revenues the state had not expected to have when the year’s budget was created, thus avoiding painfully undercutting budgeted commitments.

With bipartisan support, lawmakers put $500 million into the BSF in the budget bill with an additional $250 million in the budget omnibus bill. $219 million more – half the tax revenue collected in excess of official estimates - was later transferred from the SGF once the final tax revenues for the year were tallied, as directed by state law. The $969 million total now in the BSF will cover almost 39 days of SGF operating costs – a remarkable leap from where the fund was just a year ago. The cushion provided by these surplus funds has allowed the state, for the first time in 23 years, to close out the fiscal year without needing to take out a short-term loan to cover day-to-day expenses.

Preparing for the next storm starts now

While the unpredictable environment that enabled success in FY 2022 may not exist again, the benefits of such a huge jumpstart can be maximized by enhancing a few aspects of the savings fund, which would strengthen and optimize its use. Some recommended changes include:

Combined with other sensible measures to pay off debts and reduce obligations like those to the state employee retirement fund, the Kansas budget is, for the first time in many years, in a healthy position to start the fiscal year. However, keeping the state running requires constant budget monitoring and adjustments. Sunny times like now are the perfect time to make low-risk improvements that could prove invaluable in the future.