Kansas Action for Children examined the implications of exempting Social Security and retirement income. Kansas already has a targeted policy that limits the exemption of Social Security income to lower-income seniors. Expanding these benefits would decrease state funding for programs that benefit seniors and other Kansans, while doing nothing to stimulate economic growth.

“The widespread assertions made by state legislators and others that expanding these policies is good for growth therefore finds no support.” - Brewer, Conway, and Rork (2021)

Two current tax benefits (and one that passed in 2022) for Kansas seniors are targeted by income, being intentional about helping those who need the most help meeting their needs.

In addition, there are federal tax breaks for senior taxpayers, including a partial exemption for Social Security benefits and a larger standard deduction.

Research has shown retirement tax breaks do not prevent outward migration, which is minimal among seniors. In recent years, across the nation, there have been many changes to tax policy related to seniors. Despite these changes, out-of-state migration among seniors has remained stable and consistent with previous data. While many proponents for these exemptions are motivated by their belief it will keep seniors in, or attract seniors to, their state — thereby helping the state economy — research finds this is not the case.

State tax policy has “only a small effect, if any, on the residence decisions of the elderly, recent studies have found. On the whole, after their working years, residents move from a state to retire in warmer areas or in locales with lower housing costs.” (McNichol, 2019) With research showing that these tax changes do not impact migration (which is already low among the senior population), lawmakers cannot “justify offering state tax breaks to the elderly as an effective way to attract and retain the elderly.” (Conway and Rork, 2012)

Kansas does not have a shrinking senior population. In fact, it is the age group that is seeing the most growth. By 2030, it is estimated that one in five (19 percent) Kansans will be over 65. Tax breaks that fail to target lower-income Kansas seniors, coupled with these demographic trends, could prove to be unaffordable in the long term.

Targeted Breaks Are the Way to Go

“…Our analyses are unanimous in finding such policies have no positive effect on growth and could even be harmful. Moreover, the revenue costs of these tax breaks are only going to increase as the elderly population continues to grow. Combined with past evidence that elderly migration does not respond to tax differences, our results cast heavy doubt on the efficacy of these policies.” - Brewer, Conway, and Rork, 2021

Lower- income Kansas seniors’ Social Security benefits are currently exempt from taxation. Any policy change that would exempt all Social Security and retirement income for all Kansas seniors will drain the state budget while providing tax breaks for those who don’t need it. Research shows that taxing high income seniors has little effect on economic growth, while “taxes on lower-income taxpayers, of any age, decrease growth the most.” (Brewer, Conway, and Rork, 2021) 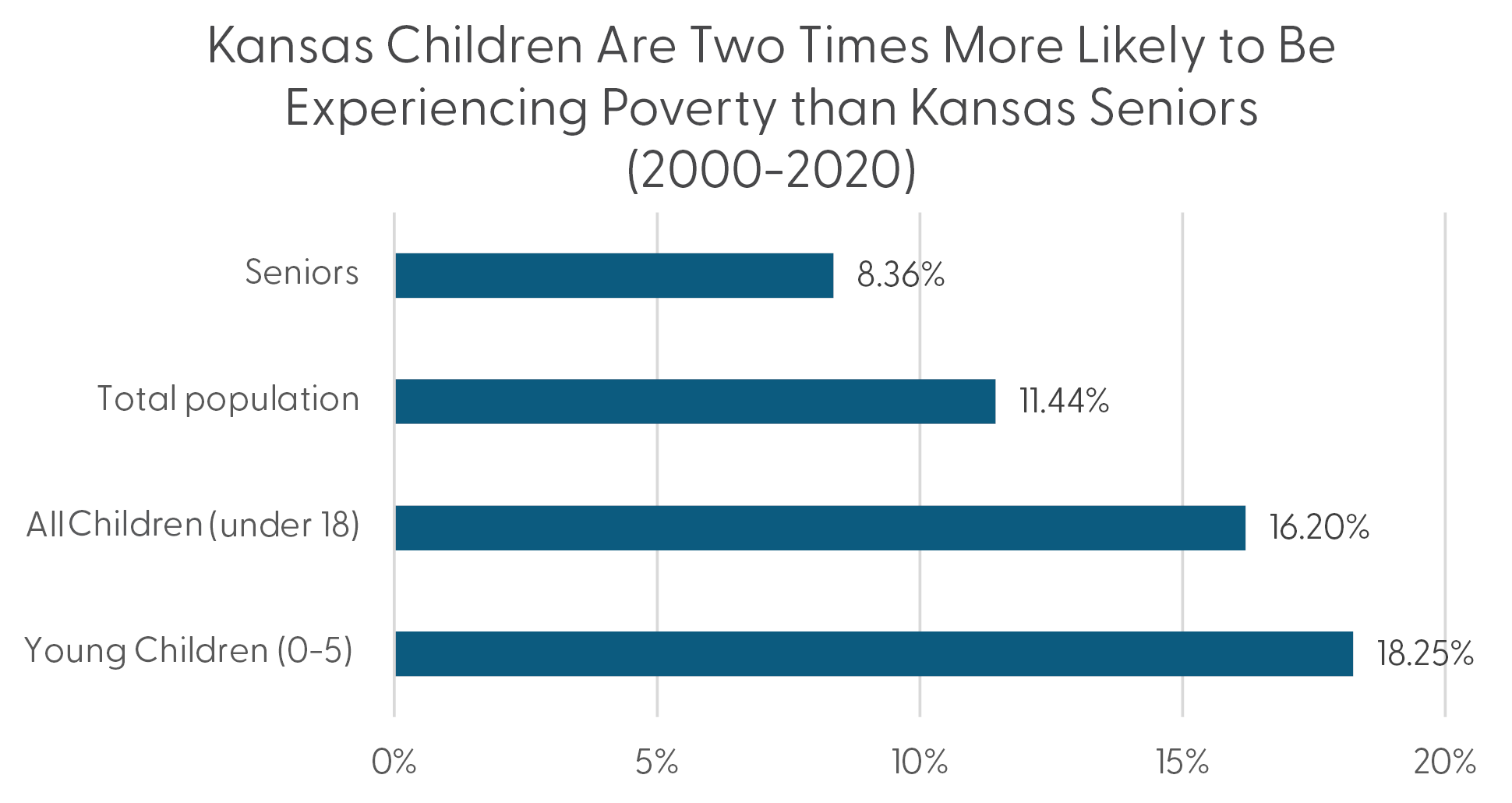 There is disproportionate access to retirement benefits in today’s workforce, with higher wage or salaried Kansas workers being more likely to receive more retirement income (as well as having their higher salaries lead to higher Social Security benefits). This means exempting benefits of higher-income Kansas seniors will cost the state more money to provide tax benefits to these retirees with higher retirement income.

State revenue is needed to fund vital programs, including many programs to benefit seniors.

Exempting Social Security and Retirement Income Would Be Expensive

Expanding the exemption of Social Security and retirement income will reduce incoming state revenue while benefitting higher-income Kansas seniors. In 2017, it was estimated that Kansas lost $130 million in revenue from senior tax breaks. Since then, there have been additional policy changes, like the recently passed Golden Years Homestead Property Tax Freeze Program (in Senate Sub. for HB 2239).

This year, there is a bill that would gradually change how Social Security benefits and retirement income are taxed. The proposed legislation would expand exemption for Social Security benefits through a formula from the current $75,000 in federal adjusted gross income to $85,000 in federal adjusted gross income in tax year 2023. The next tax year (2024), the amount exempted would be increased by $5,000 annually. The bill would also make changes to retirement income by creating a subtraction modification exempting up to $2,000 ($4,000 for married filers filing jointly) of retirement plan income. In tax year 2024, the exemption amount would be adjusted to incorporate a cost-of-living adjustment. The fiscal note for this bill was much smaller starting out, costing $7.7 million in FY 2024 for the Social Security provision and $32.5 million in FY 2024 for the retirement income portion. This gradual approach is better than an immediate full exemption of Social Security and retirement income, but the changes would continue to increase in lost state revenue.

Further tax breaks for Kansas seniors will be costly, reduce the State General Fund revenue, and make it harder for Kansas to strengthen infrastructure, maintain public safety, and fund human services — for seniors and the rest of Kansans.

Kansas seniors are a vital part of the state population, and it is important they are economically secure and feel supported by the state. However, expanding the exemption of Social Security and retirement benefits will prioritize the wealthiest Kansas seniors. This legislation will not curb migration among seniors, bolster economic growth, or help Kansas seniors most in need. Instead, it will decrease revenue needed to help lower-income seniors and the programs that assist them.