Looking ahead at Fiscal Year 2023

After a whirlwind fiscal year (FY) 2022 that resulted in a surplus of $2.8 billion, the State of Kansas’ FY 2023 budget is a bold plan designed to leverage federal funds for continued COVID-19 pandemic recovery and maintain funding for key programs and services without harmful cuts to agency budgets.

The budget for FY 2023, which began July 1, 2022, and ends June 30, 2023, includes full funding for K-12 education, meaningful investments in health (geared toward mental health and crisis prevention), and maternal and newborn supports. Lawmakers also targeted economic and workforce development, with millions in federal dollars going toward sustainable growth to build a skilled workforce through the state’s many universities and technical colleges.

How Is the Budget Funded? 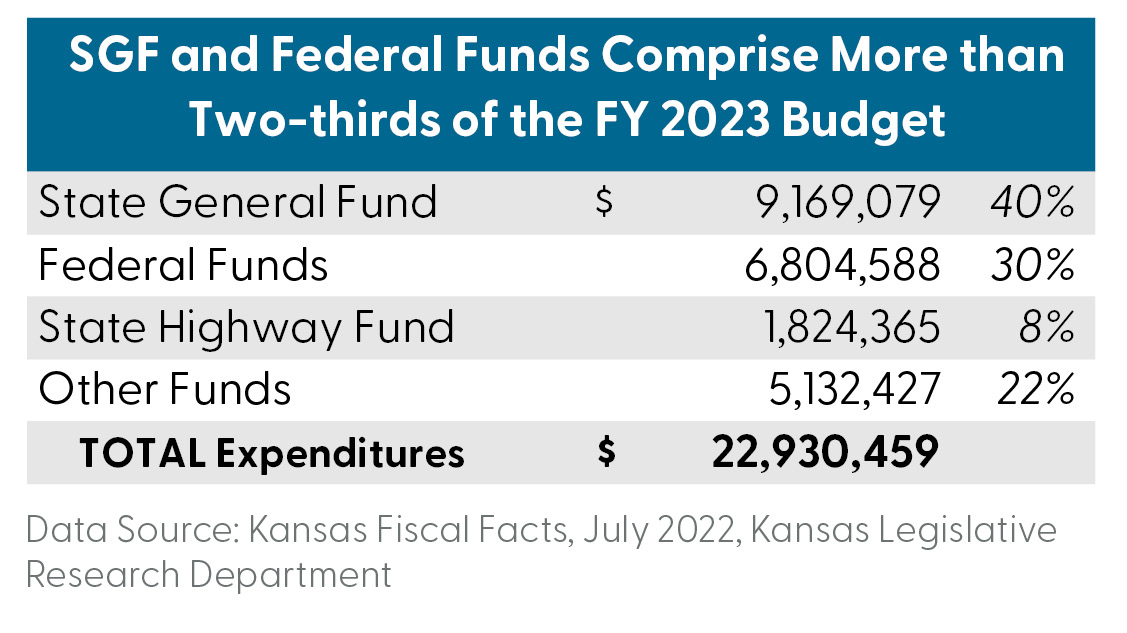 Funding for the FY 2023 budget comes primarily from tax revenues, which are deposited in the State General Fund. Tax revenues account for much of the total budget, while federal funds and dedicated special funds make up the remainder. 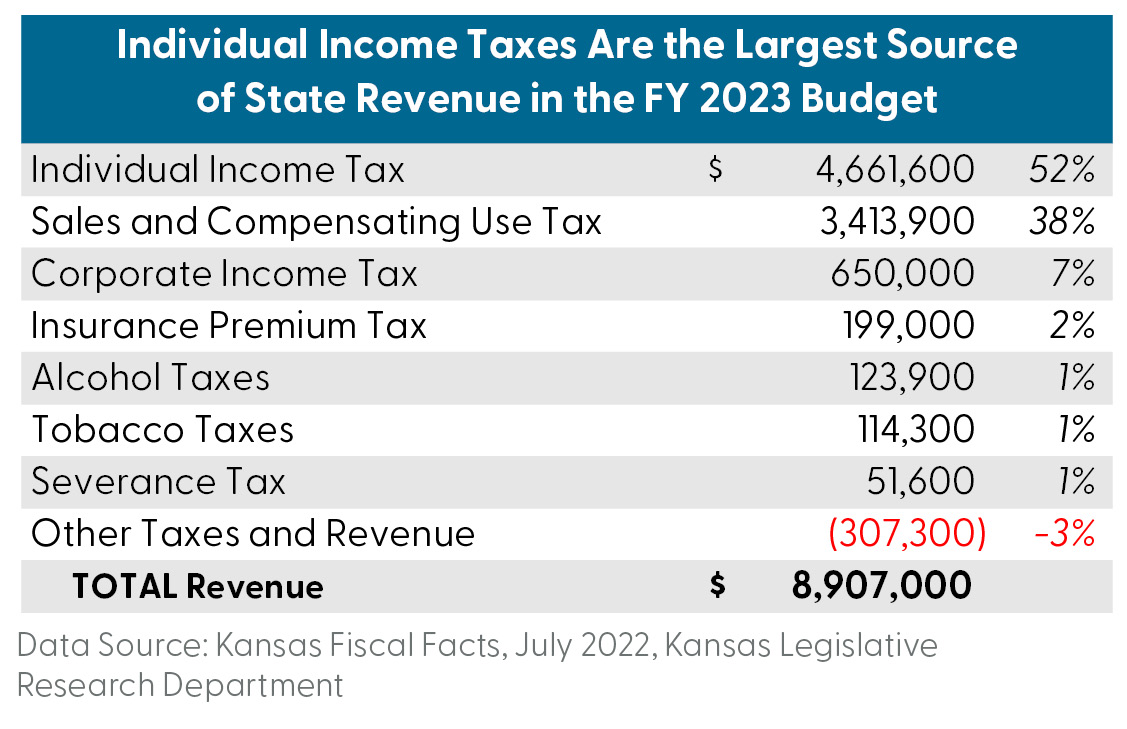 Within the State General Fund, individual and sales taxes comprise 90 percent of the total, with both expected to continue performing well in the coming year, according to forecasts. The first month of tax revenues for the new fiscal year brought in $127.6 million more than estimated, beating monthly forecasts for the 24th consecutive month.

Major Spending in the Budget

Let’s take a closer look at both of these, as well as some federal funds, to better understand their role in the Kansas budget. 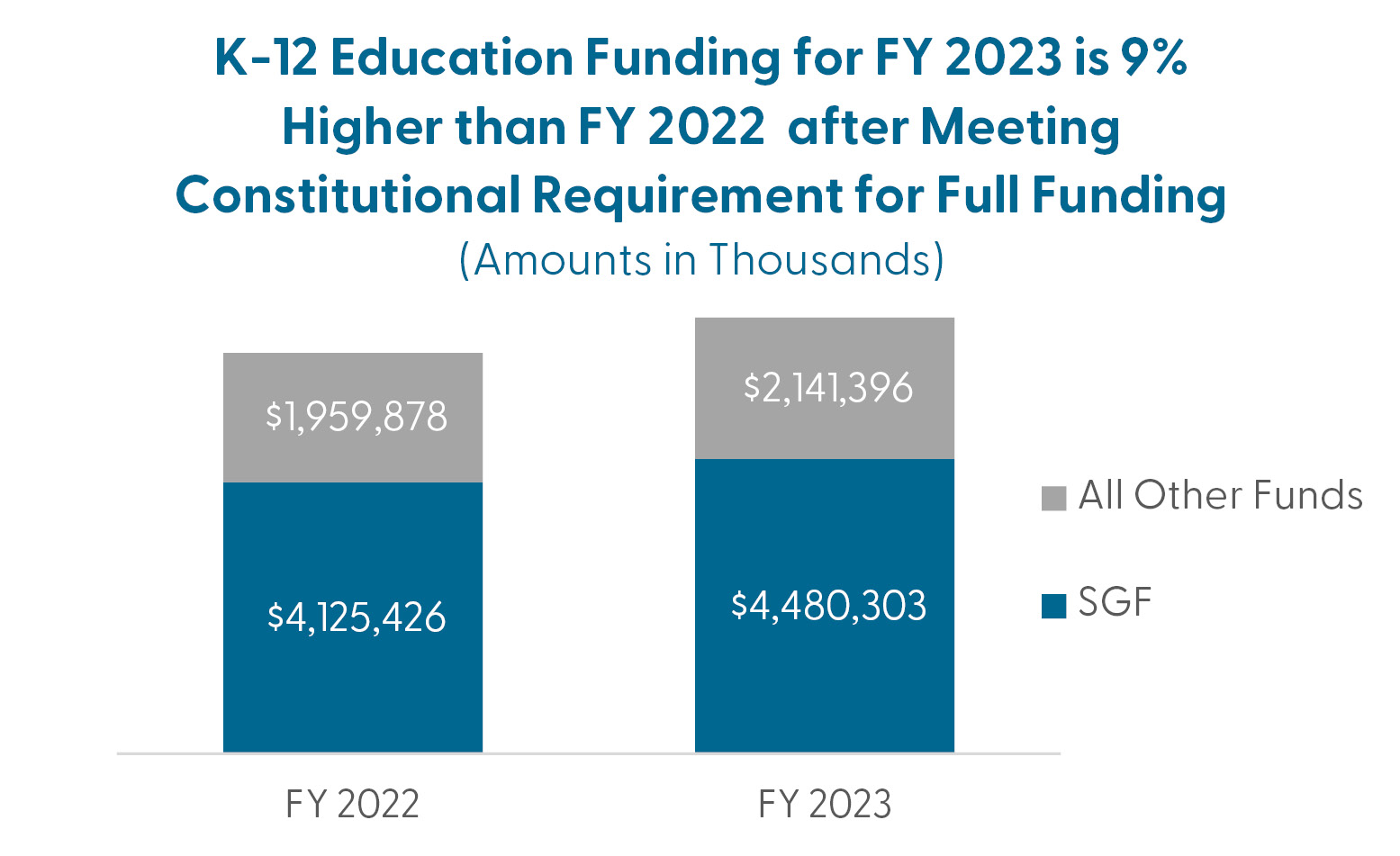 Funding for K-12 and early childhood education increased by half a billion dollars from FY 2022 to FY 2023 to total $6.6 billion, with $4.5 billion of that coming from the State General Fund. The increase was due to the state phasing in additional funding to comply with the Kansas Supreme Court’s most recent decision in Gannon v. State that found state school financing constitutionally inadequate and inequitable. The 2022-2023 school year is the fourth consecutive year of adequate funding guaranteed through scheduled increases in the base state aid per pupil. Starting in FY 2024, the base amount will be adjusted to factor in the latest inflation data available when the Education Consensus Estimates are released in the fall.

Other contributors to the increased funding include the payment of close to $200 million in delayed school funding, increasing the state’s aid toward schools in response to state tax and federal aid changes in the K-12 budget, and federal COVID relief funding.

Items that received significant increases include:

Child care items in the budget include: 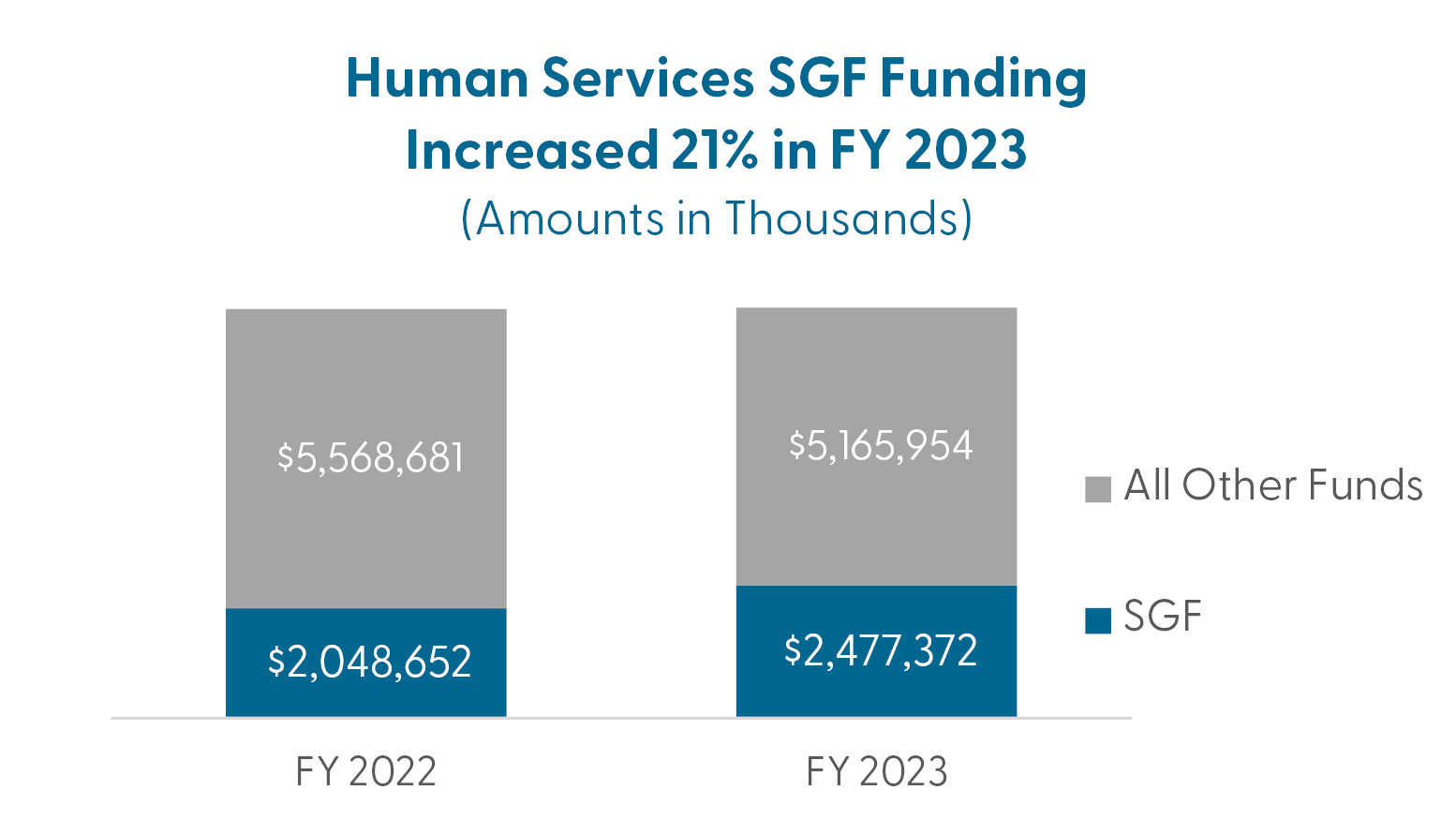 Total funding for Human Services programs is $7.6 billion, which is an increase of $26.0 million above the FY 2022 amount. State General Fund money alone was 20.9 percent higher, primarily due to increased enrollment in KanCare (the state’s Medicaid program) during the federal public health emergency. Kansas failed to expand KanCare, again missing out on a federal expansion incentive that would have lowered the state’s matching contribution from the State General Fund.

Significant additions to the Human Services budget include:

This year's budget is larger than normal due in part to an increase in federal funds, which account for 30 cents of every dollar appropriated – up from 24 cents in the FY 2022 budget.

In addition to the types of federal dollars that Kansas receives each year, the FY 2023 budget contains significant funds from COVID response packages.

At the beginning of the pandemic, Congress boosted the federal Medicaid-matching rate to help offset the cost of increased enrollment and federally required continuous coverage tied to the federal public health emergency (PHE). The enhanced federal match began on January 1, 2020, and will continue until the end of the PHE, which could be later this year or early 2023. During the 2020 through 2022 federal fiscal years for which the federal rate had been increased, Kansas will have received an additional $742 million in federal Medicaid dollars due to an estimated 25 percent increase in Medicaid enrollment.

The Kansas Legislature appropriated $380.5 million in one-time flexible “fiscal relief” funding from the state’s $1.58 billion allocation through the American Rescue Plan Act (ARPA). This is being used for numerous projects and initiatives across the state, including housing, economic and workforce development, and support for businesses impacted by pandemic-related closures.

ARPA included a $347.6 million allocation for Kansas, specifically designated to strengthen the child care sector. The FY 2023 state budget designated the remaining amount (of which there was $229.1 million at the end of May) to the Department for Children and Families to provide support for existing providers and parents and increase access to quality care.

A budget that supports a prosperous future for all Kansans invests more and cuts less. This year’s budget managed that with a combination of strong revenues from the prior year and significant federal funding, allowing the state to divert State General Fund dollars toward other uses.

However, a challenge for the 2023 Legislature will be navigating the impact that continued inflation and economic volatility could have on state revenues. Robust tax collections are contingent on economic strength, so close monitoring and appropriate adjustments may be needed should expected revenue fall short. A well-stocked rainy day fund (for the first time in history) is a welcome relief at the start of what could be an uncertain year.