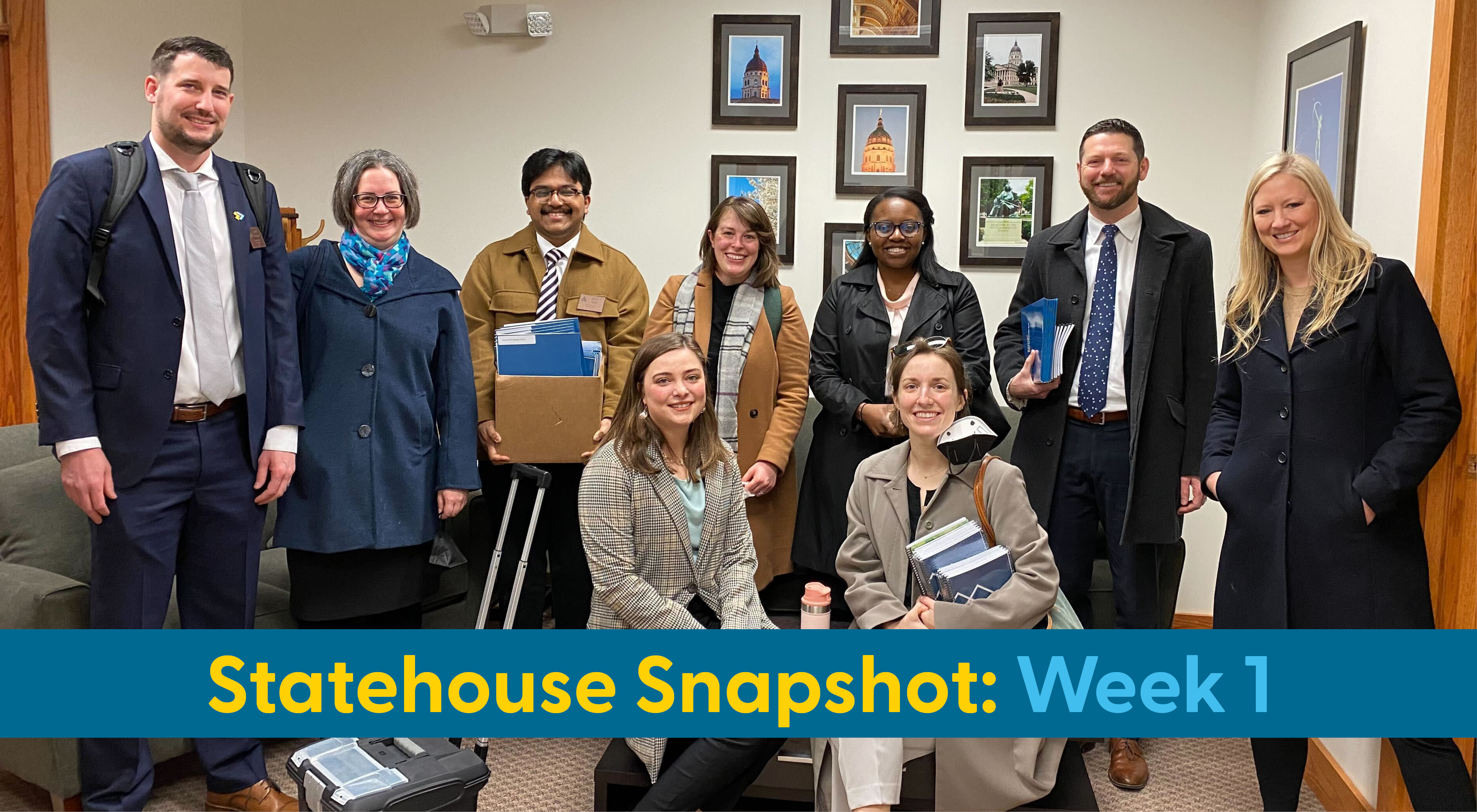 Kansas Action for Children
January 13, 2023
Want to receive this weekly recap as soon as it's released? Sign up for our emails here.

A NEW YEAR, A NEW OPPORTUNITY FOR KANSAS KIDS

KAC staff kicked off the 2023 Session with a bundle of materials to guide lawmakers — new and seasoned — on issues impacting kids and families. From expanding KanCare to eliminating punitive fines and fees on youth involved in the justice system, we look forward to working with all lawmakers on policies that will give Kansas kids the opportunity to grow up healthy and thrive.

We began the week energized, as several staff attended the inauguration, listening to calls for unity from Governor Kelly while working to make Kansas the best place to raise a family. That vision will take effort to ensure every Kansas family has enough food to eat, access to health care when they need it, a stable environment to call home, affordable and safe child care, and a quality public education for every child.

The Governor carried that forward on Tuesday, when she signed an executive order to create a task force that will make recommendations for creating a Cabinet-level agency focused on early childhood. Read more about that here.

We’ve outlined a few of our priorities that will get Kansas on this path for everyone in our state. We hope you’ll stay engaged with us through the 2023 Session as we navigate the next several months.

Yesterday, Governor Kelly released her state budget recommendations for the 2024 fiscal year, which begins on July 1, 2023, and ends on June 30, 2024. It is now the job of the Legislature to consider and act on this recommendation.

Included in the total $24.1 billion ($9.5 billion of that from the State General Fund) budget are proposals to:

Strong revenue collections and positive forecasts this year also leave room for several one-time investments, including a proposed half a billion dollars to the state rainy day fund, facility and capacity enhancements to state mental health and veteran care institutions, and overdue upgrades to the state’s outdated IT infrastructure.

The state’s current healthy fiscal position opens a world of possibilities for innovative, targeted, and equitable investments that demonstrate that our lawmakers care about the well-being and prosperity of all Kansas families. However, the temptation to cut taxes and craft deals that negatively impact the most vulnerable members of our communities is ever-present.

We will continue to advocate for equitable tax and budget policies that address the needs of low-income children and families. We will be releasing a more detailed analysis of the budget later in the month. In the meantime, you can read our educational Budget Primer to learn the basics of how the budget works so you can know what to expect from the process during the legislative session.

We saw quick movement from the House Committee on Corrections and Juvenile Justice, in which the Vice-Chairperson introduced HB 2032. The bill would remove Kansas’ ban from the food assistance program for individuals with more than one drug-related felony conviction.

A similar bill passed out of that committee last year with strong bipartisan support, but was never heard on the House floor. We applaud Rep. Smith for introducing this bill, one that can reduce hunger for Kansans who have already served their appointed sentences.

A trend from 2022’s updates already bleeds over into the 2023 Session.

Two new bills (SB 6 and HB 2007) are versions of returning anti-vaccine and anti-public health proposals discussed in 2022. But SB 20 goes much further than numerous 2021 and 2022 discussions. This bill will make it much easier for anyone (adult or child) to receive an exemption from any vaccine requirement, for basically any reason at work, child care, or K-12 schools, and imposes financial penalties if a business or organization questions the beliefs underlying the exemption request. SB 20 also removes the meningitis vaccine requirement for living in student housing at Kansas universities and colleges. We’re hopeful lawmakers won’t even consider these proposals, especially as they are particularly harmful to infants and immunocompromised community members.

KDHE’s Medicaid agenda for the year includes focusing on prenatal care and maternal/child health outcomes. The state is exploring ways to reduce the state’s maternal mortality (death) and morbidity (near-death/medical complications) rates. They are also studying adding coverage for doulas and home visits to the Medicaid program.

Finally, the state is finalizing its plan to restart eligibility re-determinations for KanCare members. This week, lawmakers asked the state agency to share that plan when it is finalized in mid-February. Those eligibility re-determinations will begin after April 1, 2023. If you or someone you know is a KanCare member, please make sure contact information is updated with the state. Click the chat robot icon at the bottom right of the KanCare homepage to get started.

The three main K-12 education committees in the Legislature all began with informational meetings focused around current and historical public school funding levels. While no bills were introduced yet, lawmaker questions point to what legislation could look like. Risky policies like vouchers and tying funding to test scores are topics legislators are interested in for the session. A bright spot could be new anti-bullying legislation to help protect students.

The Kansas State Board of Education met for the first time this week with its new members, and controversial opinions surfaced from the start. KAC will be present to ensure that learning for all students is at the forefront for the board – not fabricated ideological issues.

Governor Kelly’s budget plan was released and education — including early childhood — remains a priority. The plan includes full funding of K-12 education with appropriate inflationary adjustments, as well as a five-year plan to phase in additional Special Education dollars. We are also excited about the commitment to early care and education with increases to Kansas Parents as Teachers and the Dolly Parton Imagination Library, among others.

While early childhood education, including child care, has had a quiet start to the session, we have heard rumblings of a potential bill to tackle “unnecessary regulations” and increasing provider-to-child ratios, as proposed by a lobbying organization in the Statehouse. KAC will continue to monitor the situation to ensure that changes to child care regulations make the safety of the children a top priority.

What to Expect in Week 2

A new House Committee on Welfare Reform met for the first time on Tuesday. We know that the reforms Kansas families actually need are those that will make family support programs easier to apply for and access. We hope that, throughout the session, this new committee will listen to the organizations and individuals who know these programs best and take steps to protect and strengthen programs that assist families while they’re getting back on their feet.

Next week, the committee will hear from the Department for Children and Families about the Temporary Assistance for Needy Families (TANF) and Supplemental Nutrition Assistance Program (SNAP), called food assistance in Kansas.