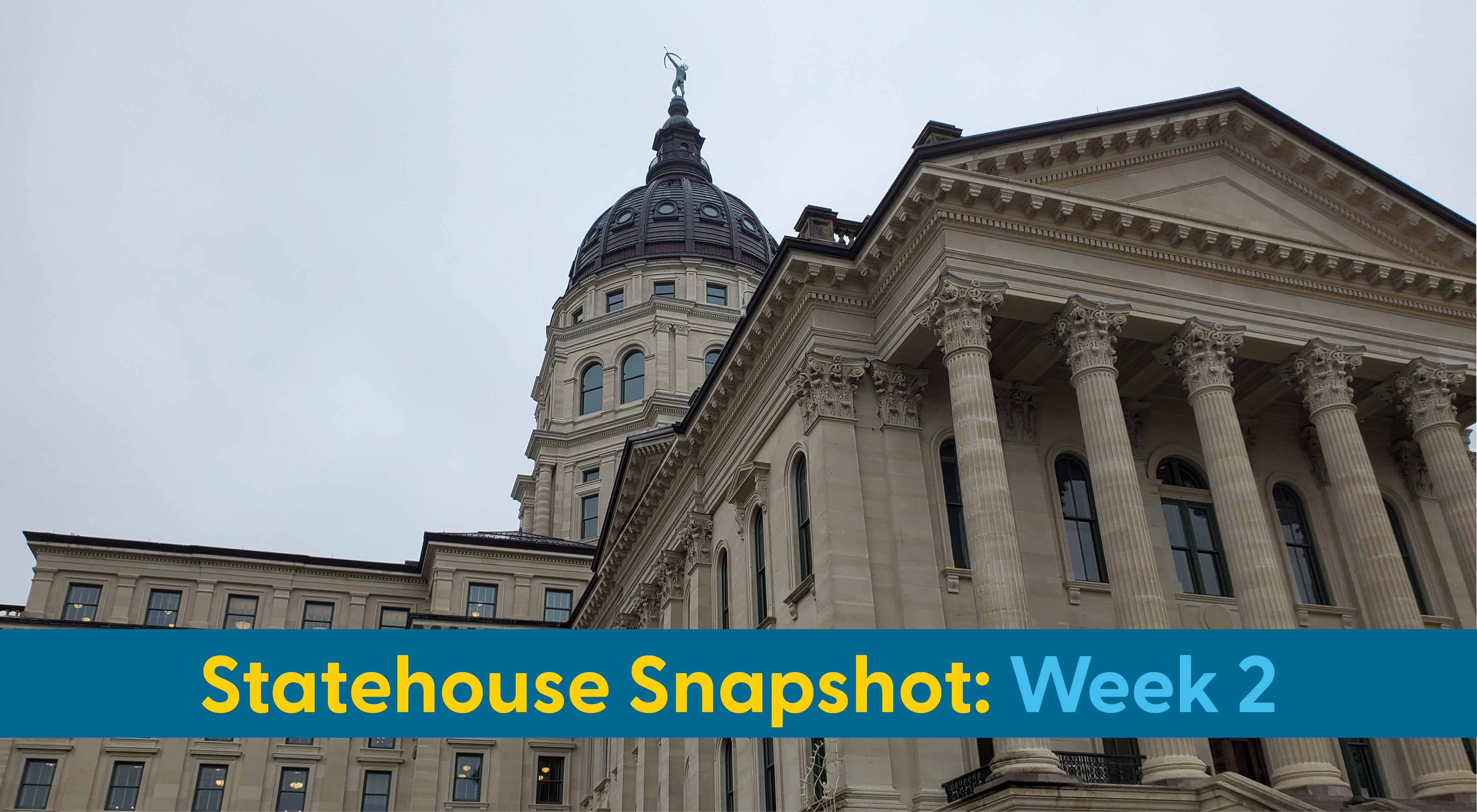 The state is seeing increased revenue, which has led to several tax cut proposals. Some of those would “flatten” Kansas’ income tax. Details vary from plan to plan, but the driving objective behind a flat tax is consistent: eliminate the state’s graduated income tax structure and replace it with one “flat” rate.

KAC supports a progressive tax structure and firmly opposes these “flat” tax rate proposals because it equates to yet another tax break for the wealthy, asking hardworking, everyday Kansans to bear even more of the tax burden. Lawmakers must champion tax reform that strengthens the state’s ability to invest in the needs of families – not put more money into the pockets of those who do not need more financial relief.

The House Committee on Welfare Reform hosted informational briefings for the Department for Children and Families to present overviews of the Temporary Assistance for Needy Families (TANF) and Supplemental Nutrition Assistance Program (SNAP) (called food assistance in Kansas) programs. Lawmakers asked several pointed questions about eligibility and restrictions to the programs, benefit amounts, the length of time Kansans could receive help, and what the typical recipient household looks like.

KAC hopes that this committee will learn as much as they can about these family support programs before they take votes that will affect the Kansas families who rely on them to get back on their feet.

In Thursday’s meeting, Representative Humphries introduced two bills that would restrict eligibility for food assistance even further. One would add a requirement for non-custodial parents to cooperate with child support services to receive food assistance benefits. The other would increase the age range of Kansans who are considered “able-bodied adults without dependents,” or ABAWDs, for the food assistance program from 18-49 to 18-59.

Two bills, HB 2050 and SB 45, have been introduced to permanently address a 15-year error in Kansas law around eligibility for the Children’s Health Insurance Program (CHIP). When CHIP was last significantly updated in 2008 by the Legislature, the final bill unintentionally tied eligibility to the 2008 federal poverty level (FPL). As a result, the state has had to annually convert the eligibility percentage to reflect the 2008 FPL. Eligibility should be up to 250 percent FPL, but by 2021, the converted percentage had declined to 225 percent! This means kids who should be eligible for CHIP are losing their eligibility because of this error. (Learn more about this issue here.)

Because of ongoing inflation, we anticipate the eligibility percentage to decline even further in 2022. However, last year’s Legislature temporarily fixed this issue through the budget process. CHIP eligibility is now temporarily back up to 250 percent FPL through June 30, 2023, but we are again advocating for the issue to be permanently addressed by this year’s Legislature. We hope to see hearings scheduled soon for both bills.

No new anti-vaccine bills were introduced this week, and we continue to monitor HB 2007 and SB 20 closely for any action.

Child care affordability and access has become a hot topic around the Statehouse in the first few weeks of session. Everyone knows that this is an issue that impacts nearly every Kansas family, and lawmakers have been hearing from constituents about the challenges lack of child care has created for families and businesses alike. Last session, the Legislature passed an expansion of the Employer Child Care Tax Credit, which gives businesses the opportunity to begin helping employees with child care costs.

This year, rather than investing in our youngest Kansans by looking for ways the state could increase wages for providers or cut child care costs for parents, several lawmakers have begun to target child care regulations. While we know that some regulations may need modification and clarification to help streamline the licensure process, putting regulations into law limits the state’s ability to adapt to changes in circumstances or issue waivers.

The primary purpose of regulations is the safety of children; deregulating standard provider requirements puts children at risk and does nothing to improve the child care crisis in the state. We hope these lawmakers will listen to the input of providers and teachers, and how the state can invest dollars so every Kansas kid has the opportunity to access early learning and child care programs in the state.

What to Expect in Week 3

A few bill hearings are set for next week that KAC will weigh in on.

New resource: Get day-to-day updates on what bills KAC is monitoring during the 2023 Session here.