August 5 marked an important milestone in kids’ health insurance history: on that day in 1997, the Children’s Health Insurance Program (CHIP) was signed into law. Because of the program, thousands of Kansas kids gained insurance coverage, and it helped decrease the child uninsured rate from 7.8% in 2008 to 5.8% in 2019. But when the 2008 Kansas Legislature last significantly updated CHIP-related laws, an error was made that affected the CHIP eligibility level — an error that must be permanently fixed by the 2023 Legislature.

Building on Medicaid’s success over the last 25 years, CHIP is a critical piece of the federal-state response to children’s health care needs. The program covers kids whose families earn too much to qualify for Medicaid but too little to afford private health insurance. 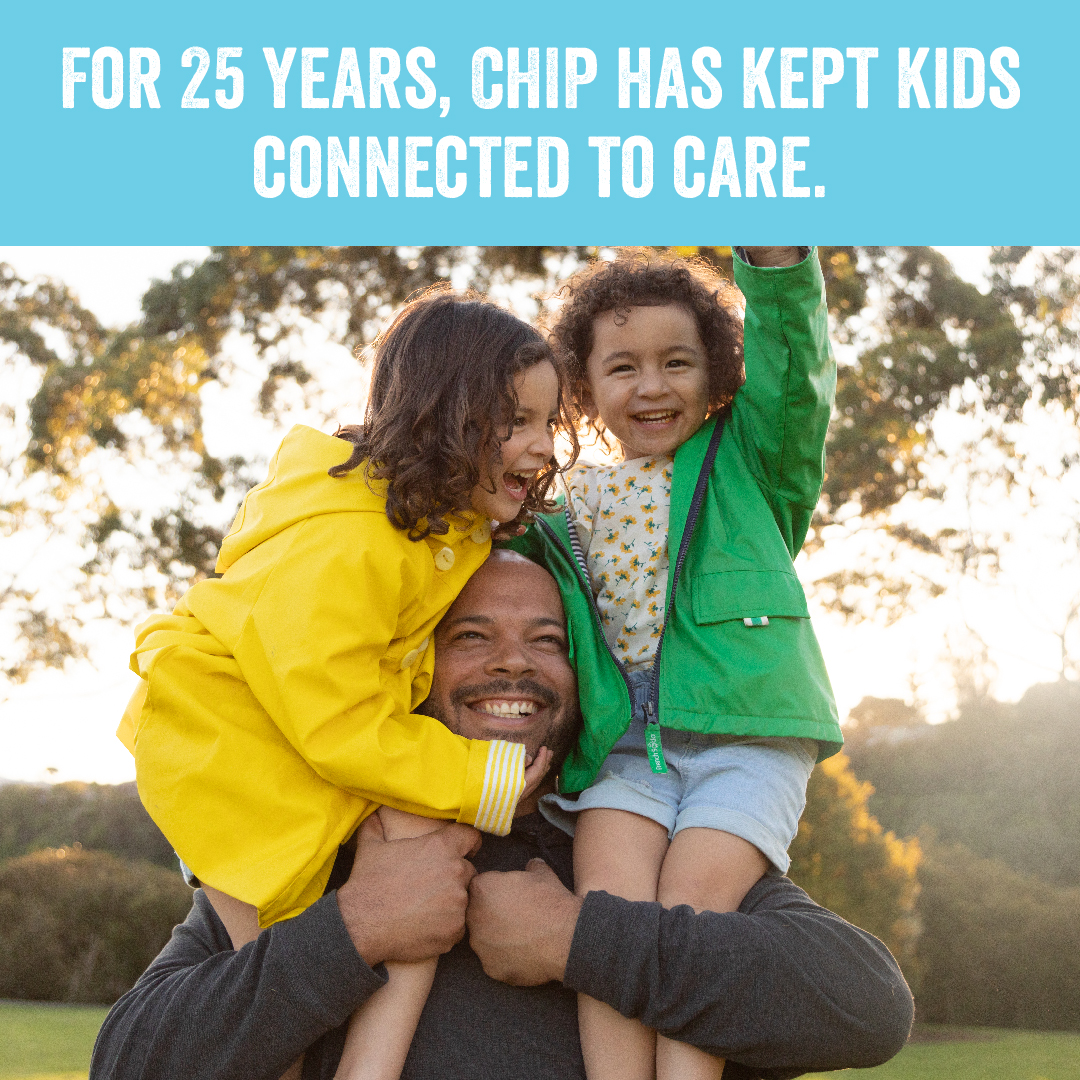 Medicaid and CHIP work together to provide free or low-cost health coverage for kids, covering important services like doctor and dentist visits, immunizations, prescriptions, and hospital stays. These programs are a lifeline for families in Kansas who aren’t offered or can’t afford health insurance for their children on their own. They are designed to work together to meet children’s health care needs and ensure that no one is left behind.

Georgetown University’s Center for Children and Families recently released a report examining the 25 years of CHIP’s impact on kids’ health and health insurance access and opportunities to remove barriers to insurance access.

Health insurance coverage is essential to a healthy childhood. Research shows when kids have health coverage, they are more likely to be ready to learn, do better in school, go to college, and succeed in life.

With this 2008 reference included in the law, Kansas must annually convert and reduce the CHIP eligibility threshold as the current federal income poverty guidelines increase each year.

The Kansas Medicaid program annually submits a State Plan Amendment (SPA) with this converted percentage (see table below). In 2021, Kansas CHIP eligibility at 250% of the 2008 federal poverty income guidelines converted to 225%. The 2022 conversion was expected to be much lower than 225%.

These decreasing income levels mean that many Kansas children have lost their CHIP coverage over the last 14 years – even if their family income didn’t change. And more Kansas children will continue to lose their coverage if this error is not fixed. 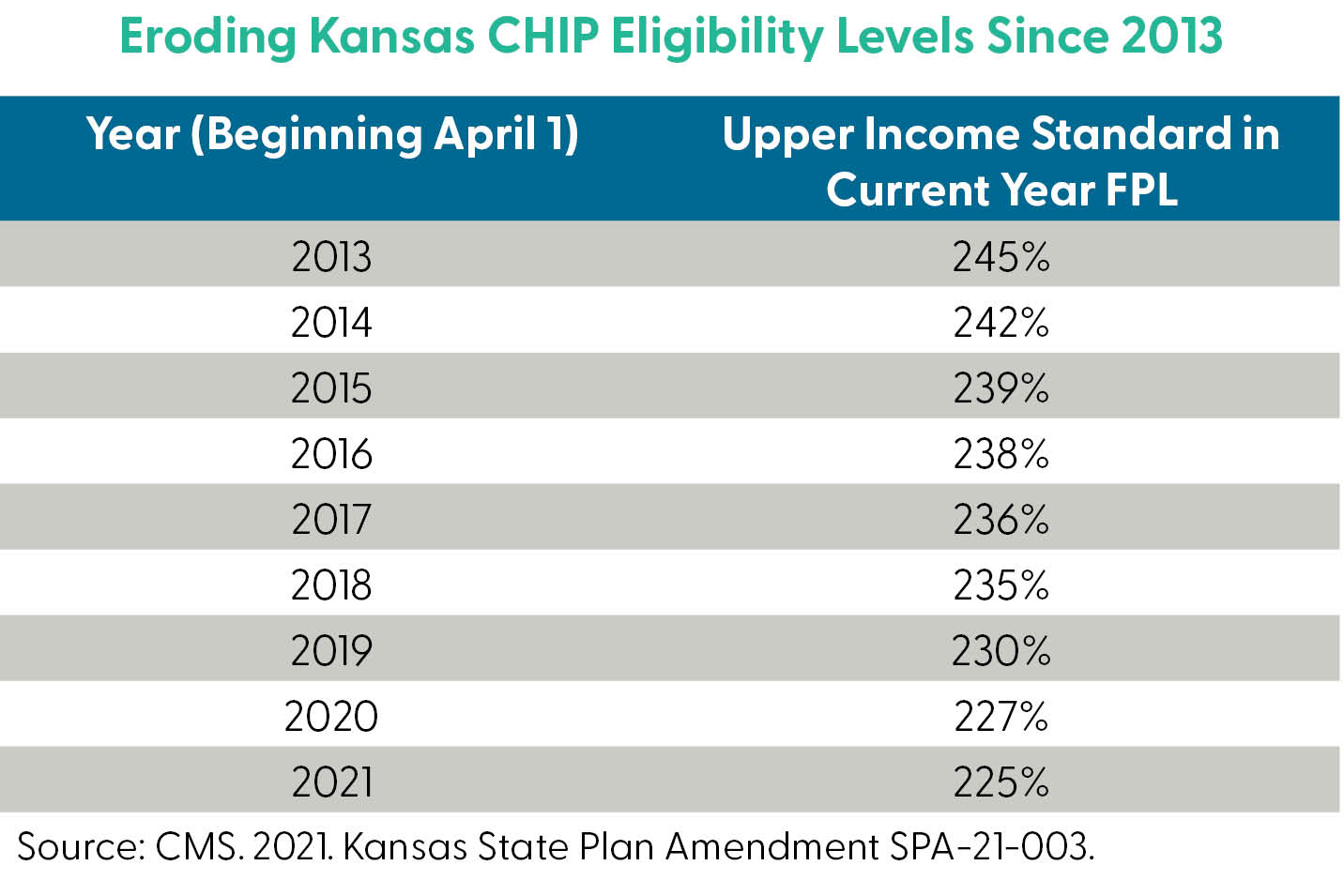 During the 2022 legislative session, KAC advocated for a permanent fix to this error. SB 407 would have removed the year-specific language for the CHIP eligibility federal poverty income guidelines so Kansas families are on an even playing field with every other state in the country. While the bill only removed the year-specific language in law — and did not expand CHIP eligibility — it failed to receive any floor vote.

Fortunately, lawmakers added funding for a one-year fix and approved $1.4 million (including nearly $394,000 from the State General Fund) for a one-year fix to provide CHIP coverage for kids in households with a total income that falls beneath the 250% federal poverty income guidelines, temporarily ignoring the “2008” year reference in Kansas law. SB 407’s fiscal note had estimated that over 550 children would benefit from this fix in 2022-2023.

Again, though, this one-year fix is just temporary. When the 2023 Legislature convenes in January, we will work with lawmakers to permanently correct this error in Kansas law. If we don’t permanently fix the issue or pass another temporary fix, the 225% threshold in the 2021 Medical Assistance Standards will once again begin to decrease as it has for the past 14 years, jeopardizing health insurance for many Kansas kids.

As we mark the anniversary of CHIP and its successes across the last 25 years, we celebrate a bipartisan commitment to caring for our nation’s kids. The CHIP program has connected thousands of Kansas kids to insurance coverage. It would be even better if, in CHIP’s 25th year, the 2023 Kansas Legislature permanently corrected this identified error so more Kansas kids can have their health care needs met.