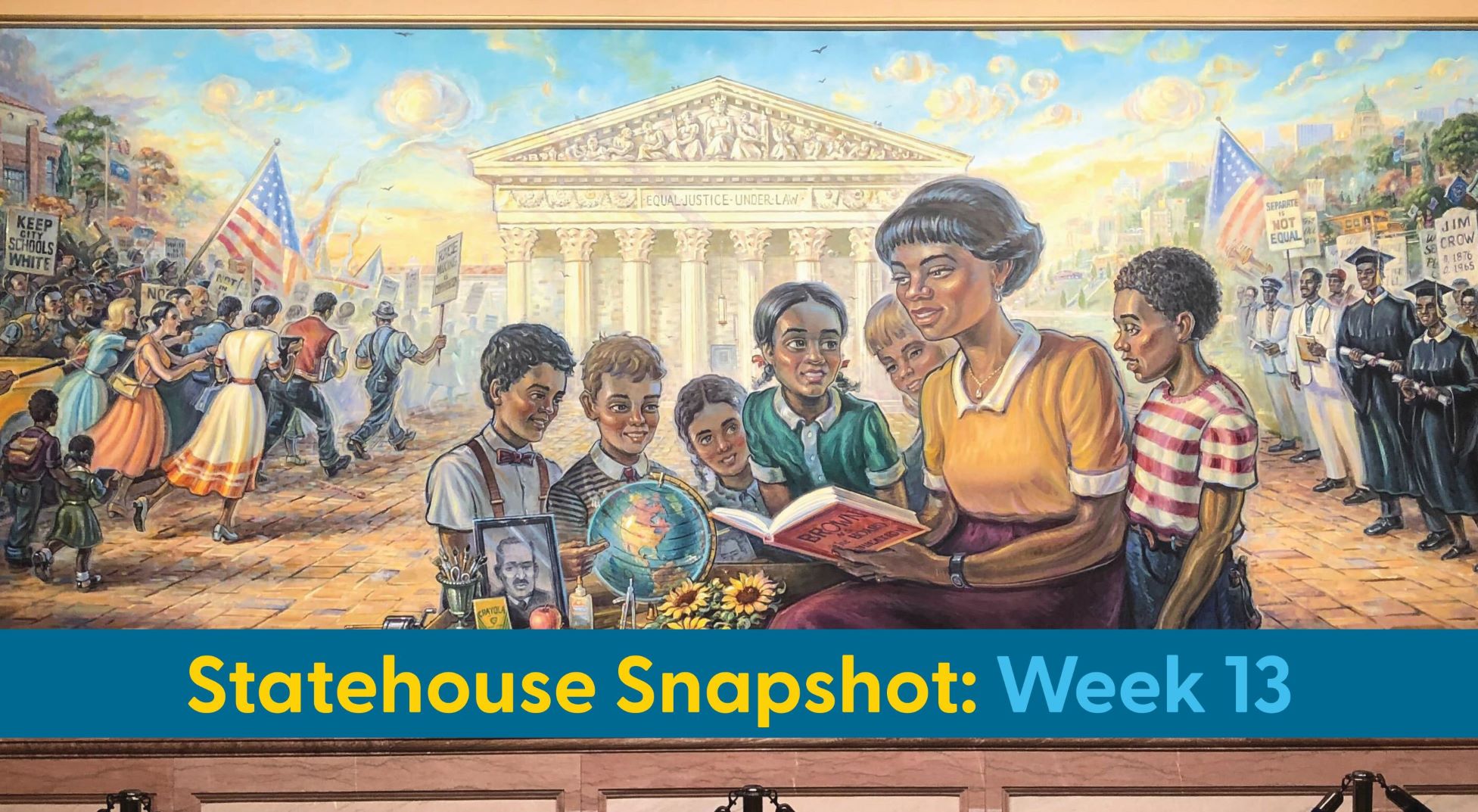 Kansas Action for Children
April 29, 2022
Want to receive this weekly recap as soon as it's released? Sign up for our emails here.

LEGISLATURE ADJOURNS UNTIL MAY 23

Lawmakers wrapped up late yesterday/early this morning after a week packed full of action. They adjourned until May 23, presumably for what is known as “Sine Die,” which is the day legislators will attempt to override any outstanding vetoes or pass last-minute bills. This week, as expected, was quite busy with several veto override attempts (one successful), as well as legislators finally passing a cut to the state-level food sales tax, a school funding bill and the final state budget, and dangerous health policy that will almost surely see Gov. Kelly’s veto pen.

While Kansas kids and families made it out of Veto Session mostly unscathed, we are continuing to monitor what issues the Legislature could still act on in a few weeks, as nothing is truly finished until lawmakers officially adjourn on Sine Die.

As the Legislature will remain quiet for the next few weeks, our legislative updates will also pause. You can follow us on Twitter @kansasaction for any updates in the meantime. We’ll make sure to send you an update in late May on what happens when lawmakers return May 23.

Lawmakers came to an agreement and passed HB 2106, which gradually reduces the tax rate on groceries, eventually bringing it to 0% on January 1, 2025. We are disappointed the initial reduction to the food sales tax does not begin sooner, but we are thankful the Legislature addressed the high food sales tax rate before they adjourned. With the Governor already indicating she will sign the bill, Kansans can expect their grocery bills to begin decreasing January 1, 2023.

Thank you to everyone who contacted their lawmaker and urged them to help make food affordable for Kansas families! Your engagement and actions truly made a difference.

In the early hours of Friday morning, there was an attempt to bring Senate Sub. for HB 2597 to the Senate floor. Luckily, there was push back about bringing such a big piece of legislation, which includes several major changes to Kansas tax policy, to the floor at such a late (early?) hour. The bill was tabled for now, but we will be watching closely when the Legislature returns on May 23 to see if the bill discussion returns.

Following a single whirlwind day in conference, HB 2510 was passed in both chambers by wide margins. The April Consensus Revenue Estimate released last week estimated an increase of $760.2 million for FY 2022 and FY 2023, which allowed additional flexibility to the budget committees for items deferred in conferences from SB 267 (the first budget bill) earlier this session.

Among the major inclusions in the bill were early payoff of a series of bonds totaling almost $400 million in FY 2022, adjustments for Human Services Caseloads totaling more than $330 million in FY 2022 and 2023, a late addition to provide $10 million for the new 988 crisis prevention hotline, and $14.6 million for state fair facility updates. A wide range of investments to community colleges, economic development initiatives, and increased housing from federal American Rescue Plan Act funds were also included, making effective use of part of the approximately $397 million that remained unallocated. The conference committee also added an additional $250 million to the Budget Stabilization Fund, adding to the $500 million passed in SB 267.

Yesterday, both the House and the Senate voted to override the Governor’s veto on Senate Sub. for HB 2448. The House’s original vote on this bill was 70-46, well below the two-thirds majority needed to override a veto. However, several conservatives were absent for the initial vote and others flipped to support the bill and override the veto.

We are disappointed the Legislature has chosen to make it even more burdensome for poor, mostly already-working Kansans to receive the three-month food assistance they need to get back on their feet. This measure will likely kick many Kansans off the program and deter even more from applying in the first place. And all to restrict hungry Kansans’ access to a mere $5.02 per person per day of food benefits. One in eight Kansans face hunger and food insecurity, and the last thing our state needs is more barriers to adequate nutrition.

It took a long and perilous journey to get here, but Kansas legislators (with some help from Governor Kelly’s veto pen) ultimately got us to a mostly good place for Kansas kids.

Following Governor Kelly’s vetoes of SB 58 and SB 160 – the “Parents’ Bill of Rights” and anti-transgender athlete bills, respectively – during the April break, both chambers attempted to override those vetoes and pass the law anyway. The efforts to override were successful in the Senate, but the House rejected both motions with bipartisan opposition. As a result, those policies are effectively dead for this year. We're grateful to the lawmakers who continued to stand with Kansas kids and voted “no” on those override attempts.

Then the Legislature passed the employer child care tax credit expansion inside a larger tax credit bill, HB 2237, with very large bipartisan majorities in both chambers. There was some confusion as to which version of the policy was included in that bill, but from following the process we understand it to be the language originally in SB 263. As a reminder, that expands eligibility for the credit to all Kansas businesses and makes the expansion retroactive to 2021. While she has not yet made an announcement on the subject, we anticipate and look forward to Governor Kelly signing the bill once it reaches her desk.

Finally, the House and Senate passed the education budget and policy bill, Senate Sub. for HB 2567. The bill drew democratic opposition in both chambers, purportedly due to the lack of additional funding for special education, the inclusion of the “open enrollment” provision that requires schools to admit out-of-district students, and an expansion of the school voucher program. We share their concern over those policy choices. That said, the budget does meet the fundamental requirement of providing adequate and equitable funding for Kansas public schools as determined by the Gannon decision, and maintains funding for early childhood programs. The Governor has made no statement about her intentions for this bill.

INFECTIOUS DISEASE POLICY PASSED IN THE MIDDLE OF THE NIGHT

Late last night, while most Kansans were sleeping, legislators rammed through a last-minute, anti-public health bill: SB 34. The most concerning change in the bill bans any mask mandates by government or public officials in almost all situations (including in a tuberculosis outbreak).

Numerous concerns were raised during floor debates (House started at 10:30 p.m.; Senate at 1:10 a.m.), but the bill passed anyway, House, 64-53; Senate, 23-17. We hope Governor Kelly will veto this bill as some of the language would drastically impact public health officials’ ability to stop the spread of future highly infectious disease outbreaks, particularly those that are dangerous to young children.

On Tuesday, the House passed HB 2387 with veto-proof majority. The bill delays the governor from sending out the next KanCare MCO RFP until January 31, 2023. It now moves to the governor. We are disappointed by this outcome, and the precedent it sets, but also recognize that different versions of this language could have been much more harmful to the KanCare program.