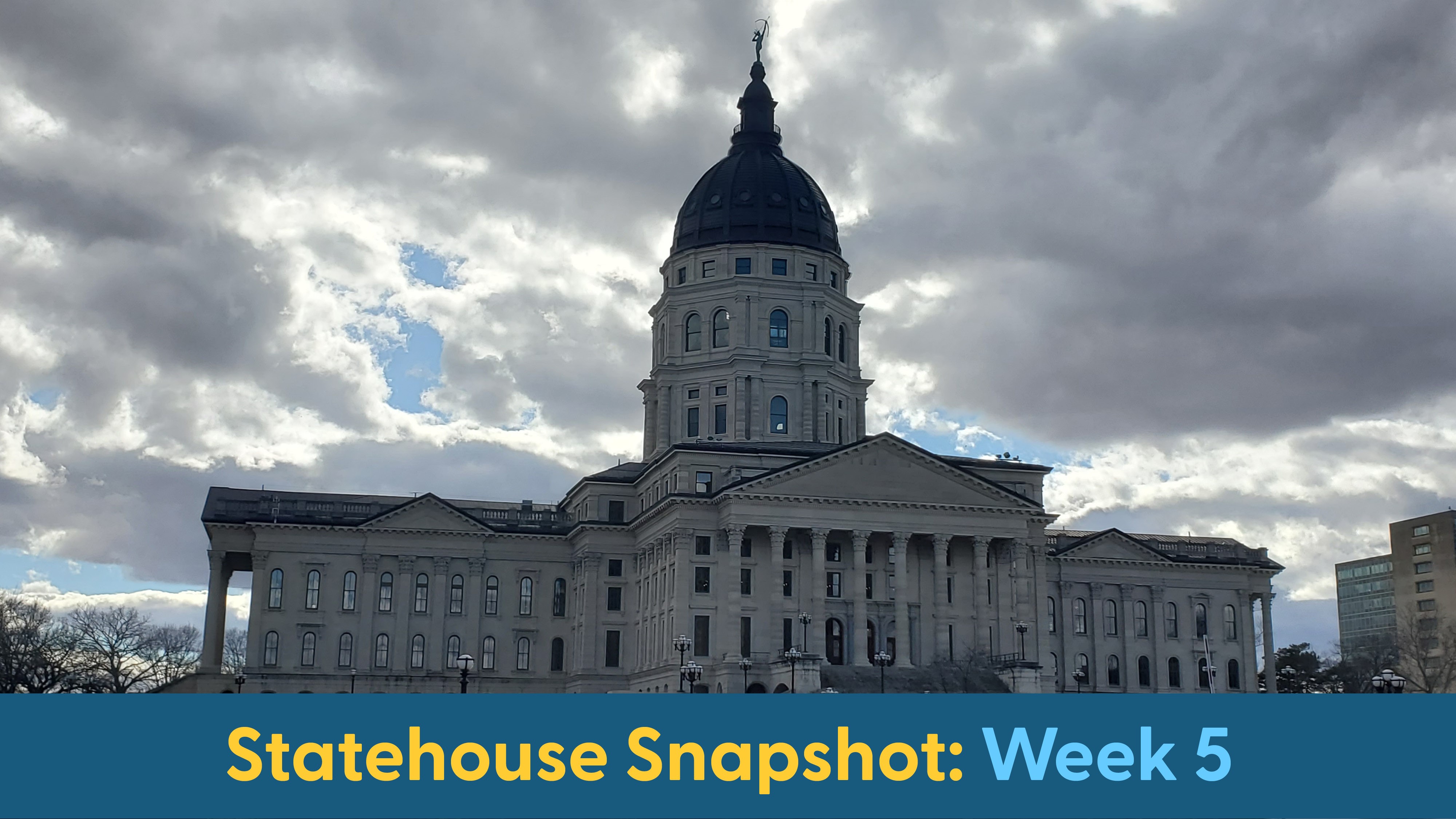 We want to share the best news coming out of the Statehouse, but sometimes we have to share news on the tough weeks, too. Unfortunately, this week was one packed full of bad policies. We saw unfavorable actions on state food sales tax, very concerning bills that would negatively impact childhood immunization requirements, and a dangerous bill that would cause irreparable damage to public schools.

There is promising news, though. HB 2215 and HB 2525 are both awaiting action on the House floor after being voted out of committee. The bills would expand access to child care (just HB 2525) and food assistance (HB 2215 and HB 2525), which would certainly help Kansans who are working hard to take care of their families.

Both the Senate Ways and Means Subcommittee on Human Services and the House Committee on Social Services Budget kept all the KDHE budget items that KAC testified in support of—provisions that would directly impact kids and families.

CHILDHOOD IMMUNIZATIONS: This week we learned that a new survey commissioned by partner Nurture KC found that more than 90% of Kansans support wellness vaccine requirements for children to attend school and child care. Read more from Nurture KC.

These are powerful and compelling results, which make us question why the Legislature has introduced so many immunization-related bills that would weaken or could potentially eliminate childhood vaccine requirements.

A recent bill, S. Sub. for HB 2280, includes concerning language that amounts to creating a new philosophical objection exemption for required childhood immunizations in Kansas. This language (originally SB 398) never received a hearing, even though it was added to a bill that was voted out of the Senate Health Committee on Tuesday and then was sent back to committee again on Thursday. We will continue to closely monitor this troubling bill.

KANCARE EXPANSION: We have brand new bills that would expand KanCare, the state’s Medicaid program: HB 2675 and SB 472! Will lawmakers finally be willing to hold hearings on these bills, with a new survey showing 78% of Kansans support expanding KanCare?

SETTING UP FOR A 2022 EDUCATION SHOWDOWN

DANGEROUS EDUCATION BILLS: A flurry of education-related bills have been introduced and scheduled for hearings next week. The most onerous of these is HB 2662, the so-called “Parents Bill of Rights,” which was introduced in the House K-12 Education Budget Committee.

HB 2662 is a Frankenstein bill that includes a litany of bad policy choices. Among them are overly broad immunization exemptions, a process for banning books and other educational materials, public confrontation of school faculty, incentives for suing a school district, removal of the affirmative defense for individual teachers found to have presented “harmful” content in class even it was part of an approved course of study, and protections for teachers who refuse to teach curriculum that they feel violates their personal religious beliefs.

HB 2662 would irreparably damage public education as we know it, further de-incentivize professional educators from choosing to work in Kansas, and deny children their right to an education that prepares them for life after school. It is currently scheduled to have a hearing next Wednesday, and KAC will be in strong opposition to the bill.

EARLY LEARNING CAUCUS: On Wednesday, the bipartisan Early Learning Caucus held its first forum of the year to present to lawmakers about early childhood programs and priorities. KAC, along with partners, presented updates.

On Monday, HB 2215, which would allow all Kansans with drug-related felony convictions to access the food assistance program if otherwise eligible, was favorably voted out of the House Committee on Corrections and Juvenile Justice with only one “NO” vote. We are grateful to our partner Kansas Appleseed for gathering testimony and prioritizing the voices of impacted Kansans to ensure the Committee understood how the current law hurts people in our communities.

Senate Minority Leader Sykes introduced SB 469, which would have the same effect as HB 2215.

CORPORATE INCENTIVE BILL: A huge (over $1 billion with a B) tax incentive bill (the APEX bill) to lure an unknown company to Kansas passed out of the House this week and was approved by the governor on Thursday. We are crunching the numbers of this legislation and what it means for the budget surplus, future budget years and their ending balances, and KAC’s policy priorities (like the food sales tax elimination).

FOOD SALES TAX: The Senate Committee on Assessment and Taxation passed out SB 339, one of the bills to eliminate the state-level food sales tax, on Thursday. When KAC provided neutral testimony on SB 339, we were concerned the bill had a delayed start date, would negatively impact the State Highway Fund, and was a more costly bill than other food sales tax bills (like SB 342). Amendments added yesterday would make the bill more expensive (by adding the contents of three others bills —SB 359, SB 327, and SB 228) and delay the start date even further (to 2024!).

In our testimony, we stated "the elimination of the food sales tax, on its own, does not appear to put Kansas in a bad fiscal position in the coming years." Unfortunately, with SB 339 now being tied to three other bills as it was voted out of committee—in addition to the massive cost of the APEX bill—KAC is concerned that SB 339 is too risky and expensive to our state budget. Remember, lawmakers had the choice to vote for a simple bill to eliminate the state sales tax on food this year. Instead, they've chosen to bundle a collection of bills and amendments that keep groceries expensive for another two years AND irresponsibly increase the fiscal note to the point that it threatens our ability to afford the elimination of the food sales tax in the long run.

WHAT TO EXPECT IN WEEK 6

Next week, KAC will present testimony on a few bills and keep close tabs on some of the unsettling policies that are starting to take hold in the Statehouse.

Lawmakers will be making rapid changes in the coming days and schedules are subject to change. Follow us on Twitter @kansasaction to receive immediate updates on lawmaker action throughout the week.