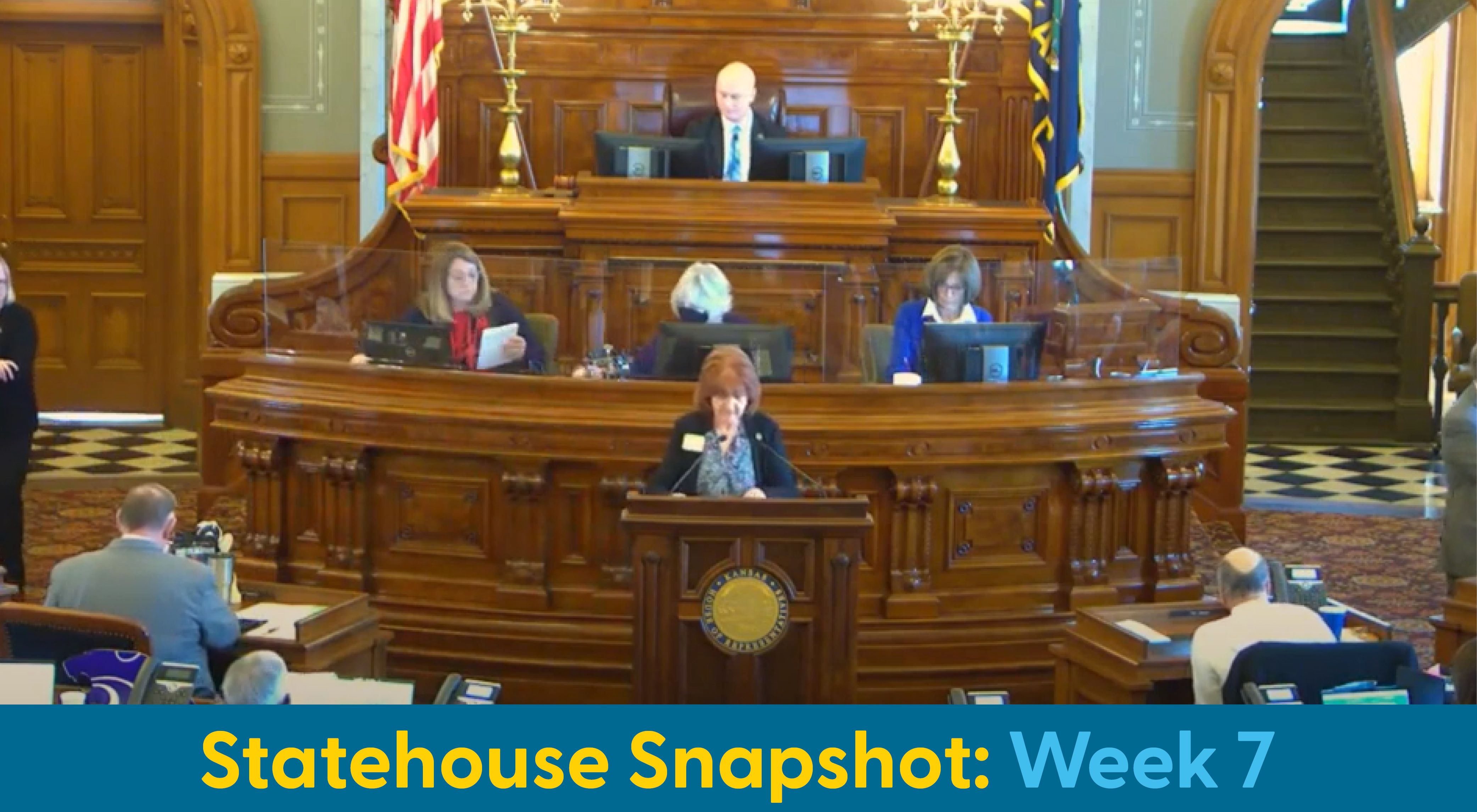 PHOTO: Screenshot from the Kansas Legislature's live stream of Rep. Esau, the carrier of HB 2525, asking for fellow representatives to vote in favor.

On Tuesday, we watched from the House gallery as the majority of representatives voted against HB 2525, a bill that would have made it slightly easier for parents to feed their families, afford child care, and complete their education. It was frustrating to see 66 lawmakers—all Republican—vote against a bill that was approved unanimously by committee.

And it was disheartening to realize how disconnected these lawmakers are from the reality of being a parent living on low wages and trying to provide for their kids. I was appalled to listen to certain lawmakers amplify decades-old talking points rooted in discriminatory stereotypes and character judgements about the working poor in Kansas. (You can listen to the misleading statements and questions here.)

Sadly, this is the only bill so far this entire session that failed to advance in the House or Senate. Think about that. In the midst of a child care crisis, hunger crisis, and a pandemic that forced parents (primarily moms) out of the workforce, a bill that would have helped Kansans access food and child care assistance programs was proudly rejected by a majority of the Kansas House.

And yet, despite my anger, I also feel some gratitude. HB 2525 received a vote by the full House—something for which we’ve been asking Republican leadership for years. HB 2525 received bipartisan support from 53 representatives—including conservatives, moderates, and progressives. And the recorded vote gave us a clear picture of who is standing in the way of Kansas becoming a state where every child has the opportunity to grow up healthy and thrive. Let’s get back to work.

In addition to HB 2525, there was another food security bill that KAC was watching this week. HB 2215, which would have expanded access to the Kansas food assistance program for people with more than one felony drug conviction, was denied a vote by House leadership. The bill now has no path forward during this legislative session, even though it passed out of its committee with bipartisan and almost unanimous support. An estimated 50 Kansas households per month would have had more money in their pockets to keep their families from going hungry with the passage of this bill.

Both HB 2525 and HB 2215 were bipartisan, commonsense bills that would have made a huge impact for the 1 in 8 Kansans and 1 in 6 Kansas kids experiencing food insecurity and hunger every day. Hungry Kansans should be a priority for the Kansas Legislature, and KAC will work with our partners to continue the efforts to help families in 2023.

On Monday, KAC testified against HB 2498, a vaccine bill that could jeopardize the required childhood immunization list for school and child care attendance (read and watch our testimony). Thankfully, the House Health & Human Services Committee chose not to vote on the bill before a key deadline. Several other bills related to childhood immunizations also failed to make it past Turnaround Day. Some remaining vaccine-related bills are cause for concern, particularly Senate Sub. for HB 2280 and SB 466.

Also, tentative good news, SB 407, which fixes a 14-year error in Kansas law concerning eligibility for the Children’s Health Insurance Program (CHIP), now awaits a vote on the Senate floor. We hope this vote occurs soon, as the bill is a simple technical fix for Kansas children and their families.

HB 2463, which had zero proponents, was reconsidered by the House Health & Human Services Committee on Monday and voted out with amendments that delay the new MCO contract bids by one year. It also could result in administrative red tape and legislative overreach for the entire KanCare program. Watch the committee’s discussions on Feb. 17 and Feb. 21 to hear the comments and concerns raised. We’re baffled by the fact that no one has explained who is behind the bill or how KanCare beneficiaries – a large majority of whom are children – will be helped by the bill.

BAD EDUCATION POLICIES LOOM OVER SECOND HALF OF SESSION

House Republican leadership “blessed” a handful of harmful education bills so that they can remain alive through the remainder of session. Be on the lookout for these “Frankenstein” bills that are a combination of several individual and unrelated policy bills that are being marketed as the “parents’ bill of rights.” In a single committee meeting, Republicans on the House K-12 Education Budget Committee bundled 13 distinct policy initiatives into three bills – and then Chairwoman Williams announced her intention to further consolidate her proposals into a single bill that also includes school funding, which is roughly half of the state budget. If her plan succeeds, rather than having a thorough debate on the merits of the individual policy choices, lawmakers will be forced to consider the package as a whole and choose whether to take the bad with the good, or block the good to prevent the bad.

Similarly, Senate Republican leadership “blessed” several education bills, including SB 484, a bill prohibiting some public school students from participating on school athletic teams that align with their gender. This bill has not had a hearing yet, and Republican leadership has not indicated what they intend to do with this bill moving forward. There is documented support for the policy in both legislative chambers, as they passed a similar bill (which was then vetoed by the governor) last year.

Legislators have a lot of work to do when they return on Tuesday. In addition to the education items listed above, they will also need to vote on HB 2414, the employer child care tax credit, which has been awaiting a vote by the full House since last year. Additionally, they will need to work budget for the Department of Education, which contains funding for all public school districts. We expect Republican leadership to attempt to tie the budget to the policies outlined last week, so it will be important to pay close attention moving forward as they play politics with Kansas schools and students.

On Monday, two tax bills (opposed by KAC) were voted out of committee. SB 519, which would raise the standard deduction, was voted out of the Senate Tax Committee the same day it had its hearing. The second, HB 2186, which would allow certain industries to use the single sales factor formula to determine their tax responsibility, was voted out of the House Tax Committee. We will monitor these two bills as they move forward, and we will continue to offer up stronger alternatives.

With the tax committees being exempt, they can continue to work and introduce bills. This is why the tax bills didn’t get attention on the floor this week. Bills that would eliminate or reduce the state sales tax on food are likely to see some action soon. You can read our updated blog post analyzing these bills here.

WHAT TO EXPECT IN WEEK 8

The Legislature finished their work early this week, and they will return to the Statehouse on Tuesday, March 1. Because most committees had to vote on the bills originating in their chamber before the Turnaround deadline on Feb. 24, most bill introductions are completed and committees will now work the bills that made it through the opposite chamber.

On Wednesday, KAC will present testimony on HB 2711, a recently introduced food sales tax bill. We’re continuing to crunch the numbers to see how the passage of costly bills may influence the debate about the food sales tax. Read our recent post about this.

We’ll make sure to keep you up to date on what else the Legislature might do in Week 8 on our Twitter @kansasaction.