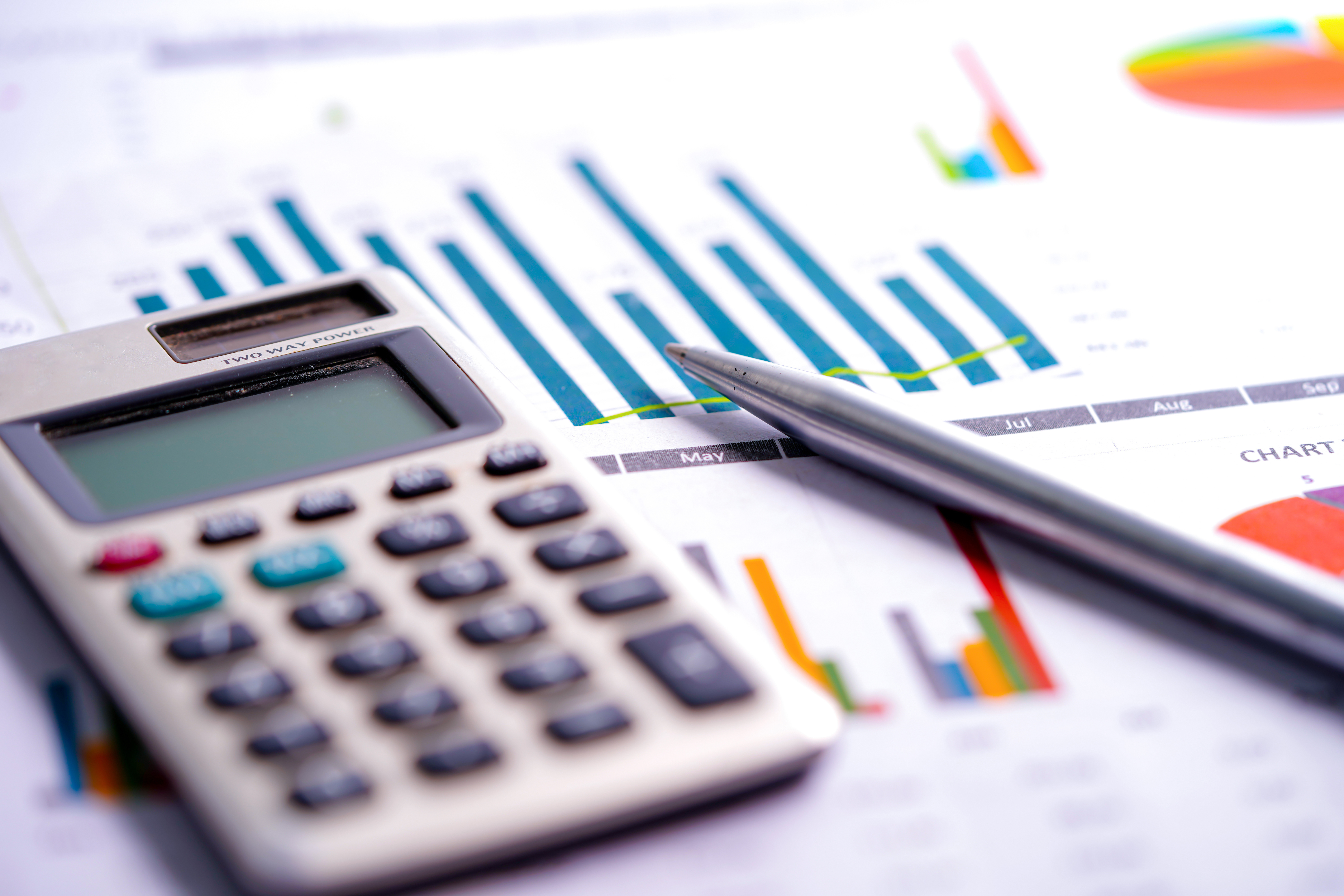 Kansas is collecting enough revenue to fund its current commitments while maintaining a healthy ending balance, as demonstrated in the revised economic forecast released by the Consensus Revenue Estimating (CRE) Group in late April.¹ The budget outlook remains positive compared to the projections in the November 2021 estimate despite recent global disruptions, including inflation.

The new forecast and economic profile (which have been adjusted for the current elevated inflation as well as legislation passed this session) shows what’s behind those numbers and what it tells us about the current financial picture and implications for Kansas.

Some of the key takeaways from the report include:

What the forecast does — and doesn’t — tell us
The purpose of the forecast is to project surpluses or deficits based on the state’s current and future budget commitments, with adjustments made for external variables that could affect the state’s revenue outlook. However, as we’re nearing the end of the fiscal year and heading into the next budget cycle on July 1, 2022, uncertainty about the pandemic has largely been replaced by uncertainty about inflation, and the exact extent to which it will affect the state remains to be seen.

In the CRE memo, Real Kansas Personal Income (KPI), which is described as “a measure of the economic well-being of state residents from all the income that they receive,” is expected to increase by 2.7 percent in calendar year (CY) 2022 and increase by an additional 2.3 percent in CY 2023 – slightly lowered from the November estimate, but positive, nonetheless. This is seemingly good, but the numbers tell us nothing about the types of occupations seeing this increase nor how the increases help Kansans (particularly those living on low wages) cope with rising inflation.

Inflation has been credited with a significant part of the increase in business revenues, which has led to a general increase in wages and huge profits for corporations nationwide.²  As inflation goes up, state revenues – of which sales and use taxes make up a large part - tend to follow along. For Kansas workers, however, inflation means paychecks do not stretch as far, as it can cancel out part of the increase gained from raised wages. 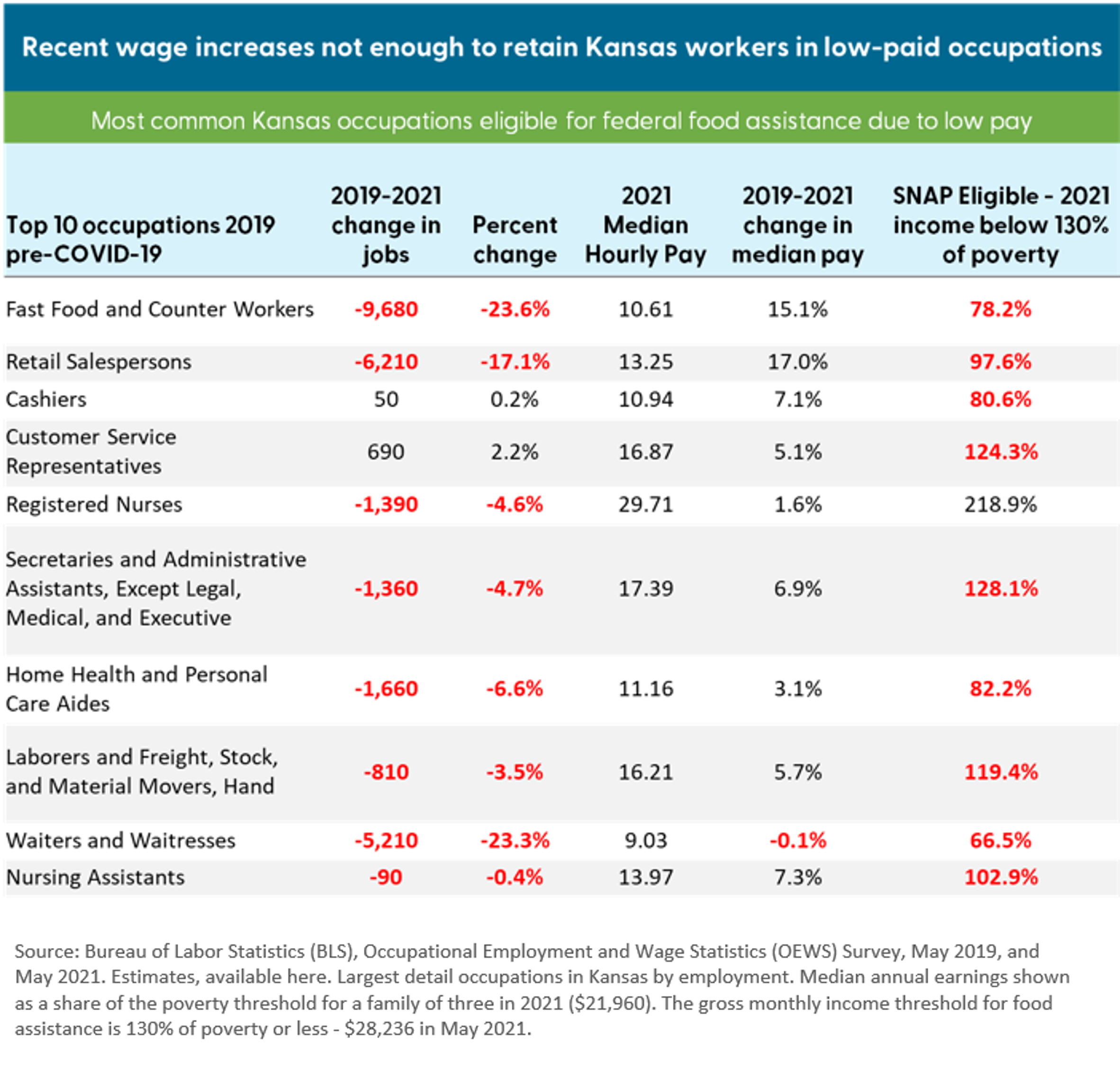 COVID-19 disproportionately harmed the jobs of low-paid Kansans, many of which were at risk of losing their employment even before the pandemic. As of May 2021, most of the top 10 most common occupations in the state had yet to return to their 2019 levels of employment.³ Among the most common pre-COVID jobs, only cashiers and customer service had gained workers, but those gains were still by very small margins.

The fast food and restaurant industry lost close to a quarter of its workforce. Interestingly, both occupations were the two lowest paid in the top 10, with 2021 median wages of $10.61 and $9.03, respectively. So, while the KPI has been showing overall growth during the pandemic recovery, it does not capture how disproportionate this has been for low-wage workers.

In 2021, almost half of the most common occupations had median wages close to or below the $21,960 federal poverty guideline for a household of three, and all except registered nurses were below the 130 percent poverty level income limit to be eligible for federal food assistance.⁴ Despite overall labor force participation just below pre-pandemic levels, it is understandable there might not be a rush for Kansans to return to occupations that fail to pay a living wage.

The continual refusal to secure livable wages for all Kansas workers by increasing the state minimum wage is a policy choice. It joins lawmakers’ other policy choices that have not enhanced the well-being of many workers and their families, such as:

When lawmakers return to the Statehouse to wrap up the session later this month, they have limited opportunities to make policy choices that can help every Kansas family, especially those most adversely affected by the pandemic and current inflation. The April forecast tells us there are sufficient funds to ensure all Kansas families’ needs are met while paying off state debts, incentivizing businesses, and saving for economic emergencies.