Court Fines and Fees Hurt Kansas Children and Their Families

Regardless of conviction, Kansans interacting with the criminal justice system often face substantial procedural and punitive fines and fees. Even for minor offenses, these costs can result in unnecessary hardships affecting family finances, social structures, and support, and can keep many trapped in the system. For low-income Kansans especially, managing these costs and eventual debt can be almost impossible as they try to rebuild their lives. Sadly, this often leads to cycles of poverty and repeated incarceration.

Before innocence or guilt is established, pre-trial costs for arrest, booking and processing, and posting bail set in motion the avalanche of financial obligations for justice-involved persons. Under Kansas laws, 29 fines and fees are authorized for misdemeanors, felonies, and traffic violations. State law also allows courts to increase the amount above the proposed statutory amount, unlike in other states where that is fixed.

With 80 percent of adults charged with felonies in Kansas classified as “indigent” (their combined income and assets are below federal poverty guidelines) and eligible for a public defender, this means the majority of fines and fees levied by our courts can never be paid. Instead, individuals who cannot afford to pay accrue court debt and, worse yet, may be detained before trial for being too poor to end their involvement with the criminal justice system.

Fines and Fees Impose Undue Harm on Youth and Their Families

It is well established that court costs, fines, and fees exacerbate poverty for adults in the criminal justice system — and their families. Between 2018-2019, 66,905 Kansas children, which is 9 percent of Kansas kids, had a parent who has been incarcerated. When a parent is in jail or forced to pay what little money they have to avoid going to jail, their ability to pay for basic needs like food, health care, child care, and housing costs is usually the trade-off. Among Kansas households with children, 29 percent already had difficulty paying for usual household expenses. The added burden of having an incarcerated parent leaves children more likely to experience poverty or food and household instability.

In addition, the psychological trauma of unnecessary pre-trial detention, incarceration, or the threat of incarceration can be devastating to both adults and children. Having an incarcerated parent is considered an adverse childhood experience (ACE) and is linked to kids having worse health and economic outcomes in adulthood and a higher likelihood of incarceration themselves, independent of any other factors present in that child’s life.

For youth in the justice system, the imposition of costs, fines, and fees is widespread and poses significant problems for low-income families. Because youth are too young to work, must attend school, or can’t find employment even if age-eligible, the financial stress is shared by the whole family. Many families are forced into debt trying to keep their child out of prison, and others must choose between meeting these financial burdens and paying for necessities like food and rent. 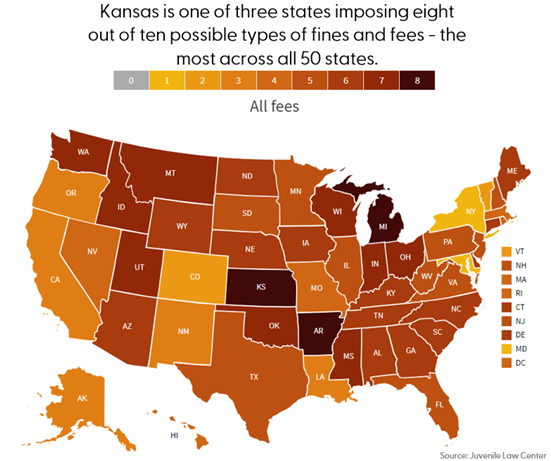 In addition to the economic hardship, not paying court costs, fines, and fees can lead to devastating consequences on future education, employment, and housing opportunities, as court debt can lead to youth being incarcerated, having driver’s licenses suspended, or inability to seal or expunge their juvenile records. By contrast, their wealthier peers who can afford to pay have access to more exit points from justice system involvement, as well as sealing and expunging records.

In fiscal year 2022, the 31 judicial districts across Kansas conducted 6,585 intake screenings and assessments for youth taken into custody by law enforcement agencies. Costs begin to accumulate at that point if the youth is confined or when they must appear in court. Kansas is one of three states imposing eight out of ten possible types of costs or fees in justice systems across the country – the most among all states. Here, juvenile courts are allowed to require payment for costs associated with confinement, supervision, or treatment; counsel; court procedures; drug, alcohol, and infectious disease testing; expungement; offense fines; probation/ supervision; and restitution.

Costs and fees significantly increase the likelihood of youth recidivism and reaffirm racial and economic inequalities. Fines and fees perpetuate youth and family debt, poverty, and instability. This disproportionately affects Black, Latino, and Indigenous youth and young people in poverty who are incarcerated or detained at higher rates, often are given harsher sentences, and have less access to positive activities and adequate economic resources.

Across the country, more than a dozen states and many localities have begun implementing programs and legislation that improve the effectiveness and efficiency of the juvenile justice system by abolishing fines and fees. Diversion from courts to community-based responses is one alternative that provides better outcomes for holding youth accountable while addressing the root causes of their mistakes in a restorative environment.

Kansas lawmakers can make reforms to ensure all young people — regardless of their race, zip code, or income — are held accountable for their actions and still have an opportunity for a bright future. These include:

Our youth justice system must focus on rehabilitation with opportunities that nurture accountability and maturity and guide young people in problem solving and empathy. That can only be achieved when unhelpful barriers are removed and youth and their families and communities are given the resources they need to overcome challenges.