How Does the State Budget Work?

The budget is more than dollars and cents. It touches the everyday lives of Kansans in every corner of the state. The budget affects the quality of life of almost 3 million Kansans across the state’s many diverse communities.

The budget is more than dollars and cents. It touches the everyday lives of Kansans in every corner of the state. The budget affects the quality of life of almost 3 million Kansans across the state’s many diverse communities.

It is one of the most significant pieces of public policy the Governor and Legislature create each year. The budget establishes how the state will invest in education, health, transportation, public safety, human services, and other areas that help build a strong state economy and citizenry. The budget details how money will be collected and spent to achieve these goals.

Here are some of the ways the state budget affects the lives of Kansans:

A budget that supports a prosperous future for all Kansans invests more and cuts less. By understanding the state’s fiscal picture and the budget process, lawmakers can fully weigh different priorities against each other while keeping the budget balanced and serving the best interests of all Kansas residents.

This primer provides a basic, high-level overview of how the budget is developed and implemented, and where the resources that support it come from.

Throughout the year, Division of the Budget staff work with each agency’s budget staff to manage three budgets at once – closing out the prior year’s, implementing the current year’s, and beginning work on the following year’s recommended budget. 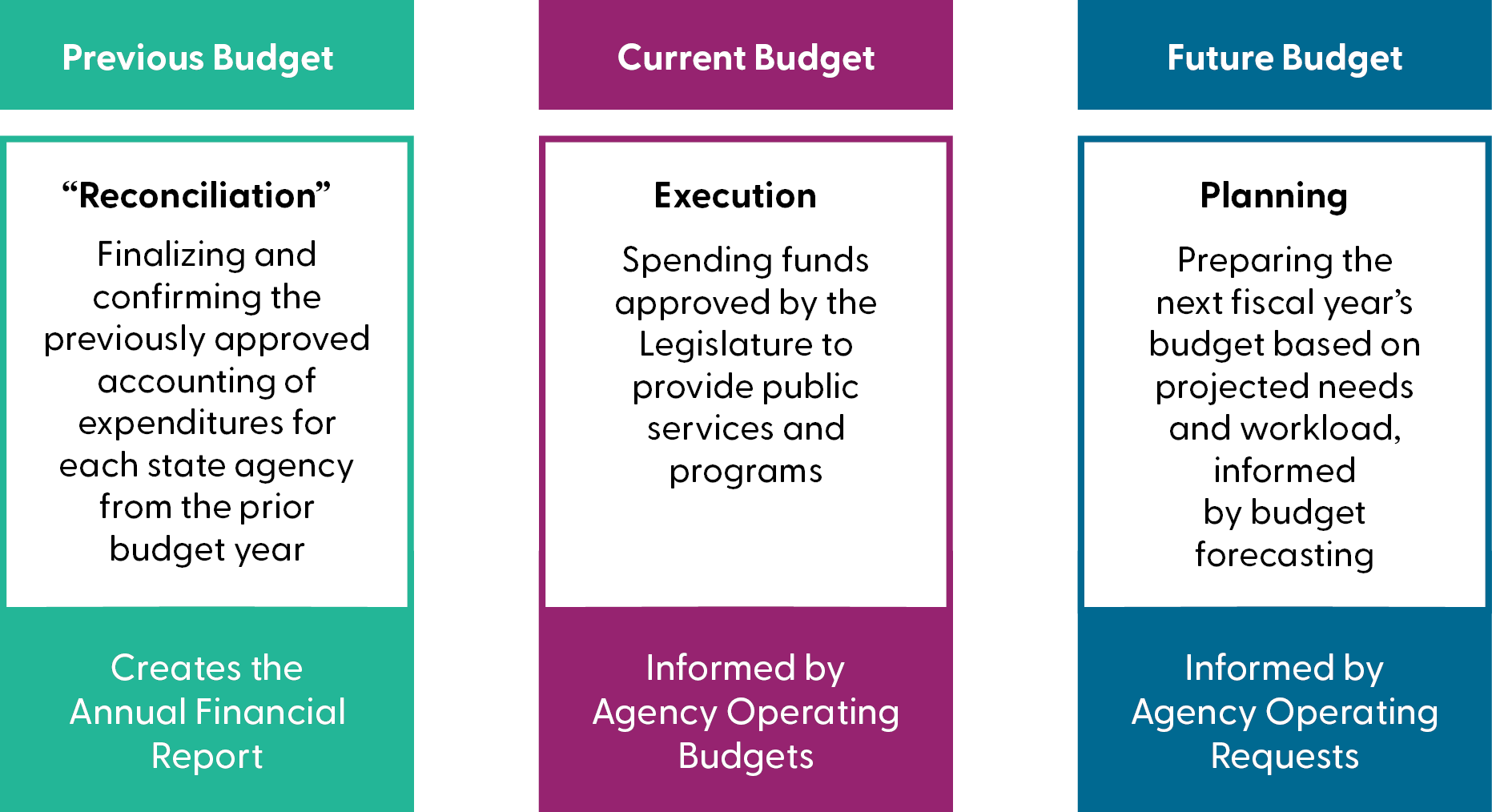 The budget process begins just a few months after the fiscal year begins in July, and largely ends on the last day of the legislative session.

Where Does the State's Money Come From?

The state’s fiscal health depends on the state’s ability to raise money from a variety of sources in a reliable way. Like most states, Kansas collects revenue from a mix of individual and corporate income taxes, sales taxes, and other various smaller taxes and fees. A fair, reliable revenue system requires both types of taxes.

Sales taxes are levied for the purchase of goods or services, but they provide a less consistent source of yearly revenue as they are more affected by economic trends. Sales taxes tend to be regressive, meaning low-income households pay a larger share of their incomes for these taxes than higher income households.

Kansas is also one of the few states that has sales tax on food. Due to a law passed in the 2022 Session, though, the 6.5 percent tax rate on food will begin to gradually reduce on January 1, 2023, until it is fully eliminated in January 2025.

The state’s reliance on individual income and sales taxes has its advantages and disadvantages. In FY 2022 as Kansans were returning to work at almost pre-pandemic numbers and many were receiving higher wages, sales and income tax revenue collections were much higher than estimated, leading to a historic surplus.

However, both sources are more easily affected by changes in the national or global economy, as we saw at the start of the COVID-19 pandemic in 2020 when schools, workplaces, and businesses were closed and people were not spending much, leading to the lowest State General Fund revenue since 2017. Had it not been for substantial federal funding, the state may have had to cut vital services in order to maintain a balanced budget.

Property taxes are another significant source of revenue for many governments. In Kansas, a local portion is levied by townships, cities, counties, and school districts to fund local area services; a statewide portion levied by the state is used to fund public K-12 education. This school funding state tax is a fixed rate that is applied to a percentage of a property’s value (known as the assessed value), resulting in a tax of $20 for every $1,000 of assessed value.

Beginning in 2022, the first $40,000 of a residential property’s value is excluded from the tax calculation. There are also programs to reduce the cost of property taxes on lower-income Kansans who are seniors, blind or permanently disabled, or have dependent minors living with them.

Several other smaller taxes contribute to the state’s revenue stream, including:

Kansas receives several billion dollars in federal funds every year. Most is restricted to specific uses and requires the state to commit a certain amount of state funds to receive the full allocation. These funds then flow through state agencies to Kansas residents, service providers, and communities.

The FY 2023 budget is larger than normal due in part to increased federal funds from COVID-19 response packages, which account for 30 cents of every dollar (up from 24 cents in FY 2022) of the total budget.

Kansas’ total FY 2023 budget, including federal funds, is $22.9 billion. The state has an extensive bookkeeping system that assigns all revenues to specific funds and accounts. Revenues are deposited into these funds and then distributed to agencies. The money in a fund may be used for a specific purpose as directed by law.

The major funds of the state include the following.

State General Fund: The state’s largest unrestricted fund. It is the primary funding source for state agency operations and major public services like health care and education. The main revenue sources for the State General Fund include individual and corporate income taxes, and sales and compensating use taxes.

Federal funds: All federal tax-supported funding allocated to the state covering a large share of Kansas overall spending for health care, K-12 education, transportation, and other services. These funds typically come with restrictions for use and reporting.

Building a Budget for the Future

The state budget is complex and can be impacted by external factors like inflation or economic downturns. But careful planning and sensible investments can help grow revenues and manage expenditures, allowing the state to afford services relied on by Kansans.

Recent actions to improve the state’s overall fiscal position — such as paying off hundreds of millions of dollars in early debt, making overdue payments to the state employees retirement plan (KPERS), and making much-needed deposits into the state’s rainy day fund — have provided the assurance of operational continuity in a possible recession and freed up millions in interest payments to be reinvested in programs to help residents.

Even as inflation has steadily increased the total budget over time, the proportion of SGF to all other funds has remained relatively constant at around 40 percent over the last decade. Particularly during the COVID-19 pandemic where billions of dollars in federal funding were allocated to all states, some expenditures that normally would have come from the SGF were made with federal dollars, which further lowered the SGF portion.

The November 2022 Consensus Revenue Estimate projected that FY 2023 will end with a $2.3 billion surplus, exceeding the 7.5 percent ending balance for the third consecutive year. If that projection remains, this creates opportunities for significant one-time investments.

Overall, the state is currently in a solid fiscal position as planning for a new budget year begins. However, there are still some items to monitor: 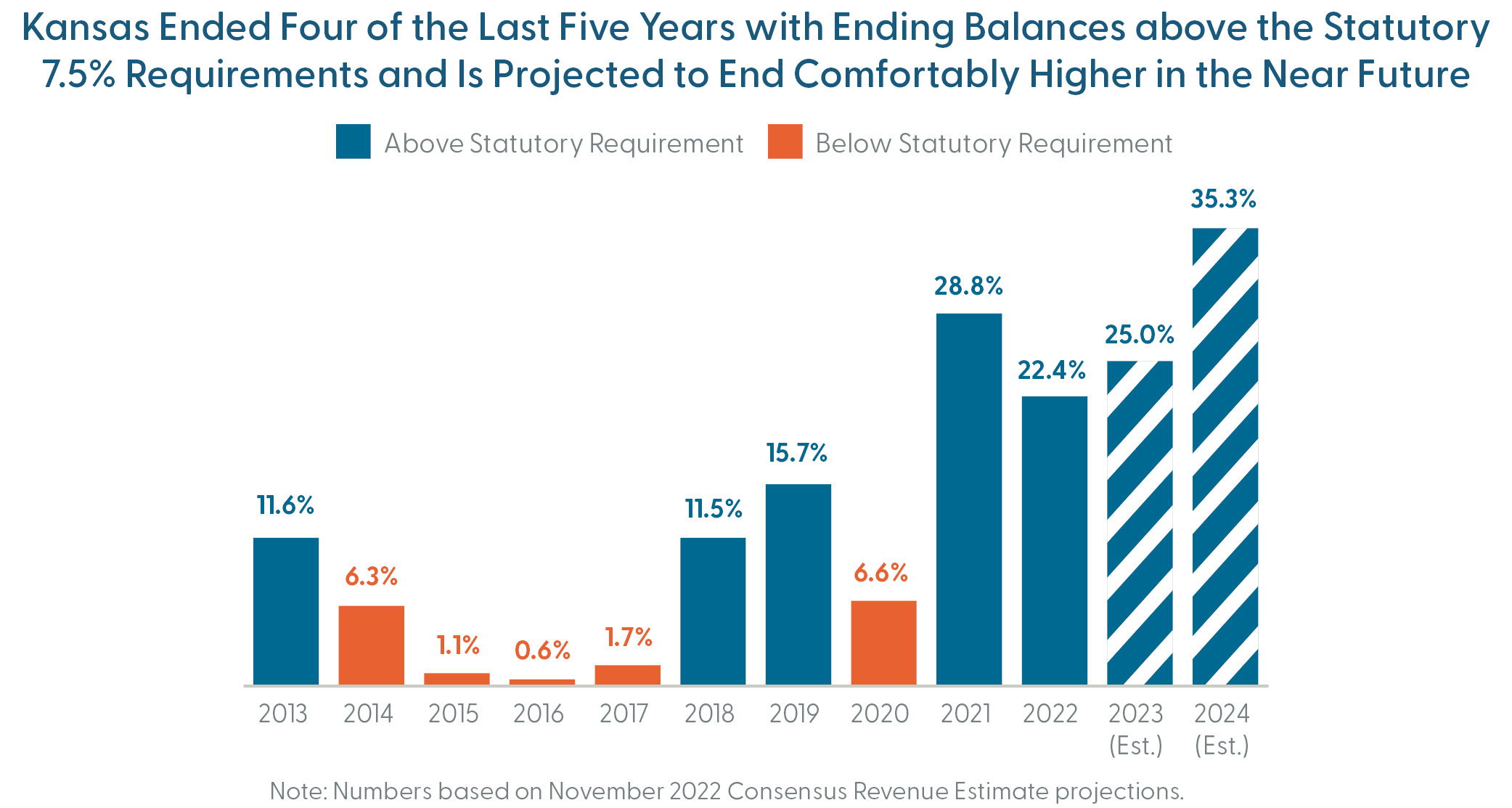 Taking Action for Every Kansan

Building a state where all children and families have the resources they need to thrive requires constant and careful management of the budget.
A challenge for the 2023 Legislature will be navigating the impact that continued inflation and economic volatility could have on state revenues. Robust tax collections are contingent on economic strength, so close monitoring and appropriate adjustments may be needed should expected revenue fall short.

Kansans deserve a budget that invests in everyone, regardless of race, income, zip code, identity, or ability. This can only be achieved by creating a stable revenue stream through a fair tax system, elevating policies that recognize and correct systemic disparities and barriers faced by marginalized groups, and by understanding the impact budget decisions will have now and in the future.