How to Read a Bill

Listening to legislative debates and reading bill drafts can be daunting for those who are not trained in understanding how the Kansas Legislature operates. For us to strengthen our advocacy muscles, though, we need to feel comfortable and confident in our ability to understand legislation and the steps lawmakers must take to pass policies. By showing both the technical aspects of legislation as well as the jargon used by Topeka insiders, this guide will help average Kansans engage in the legislative process. 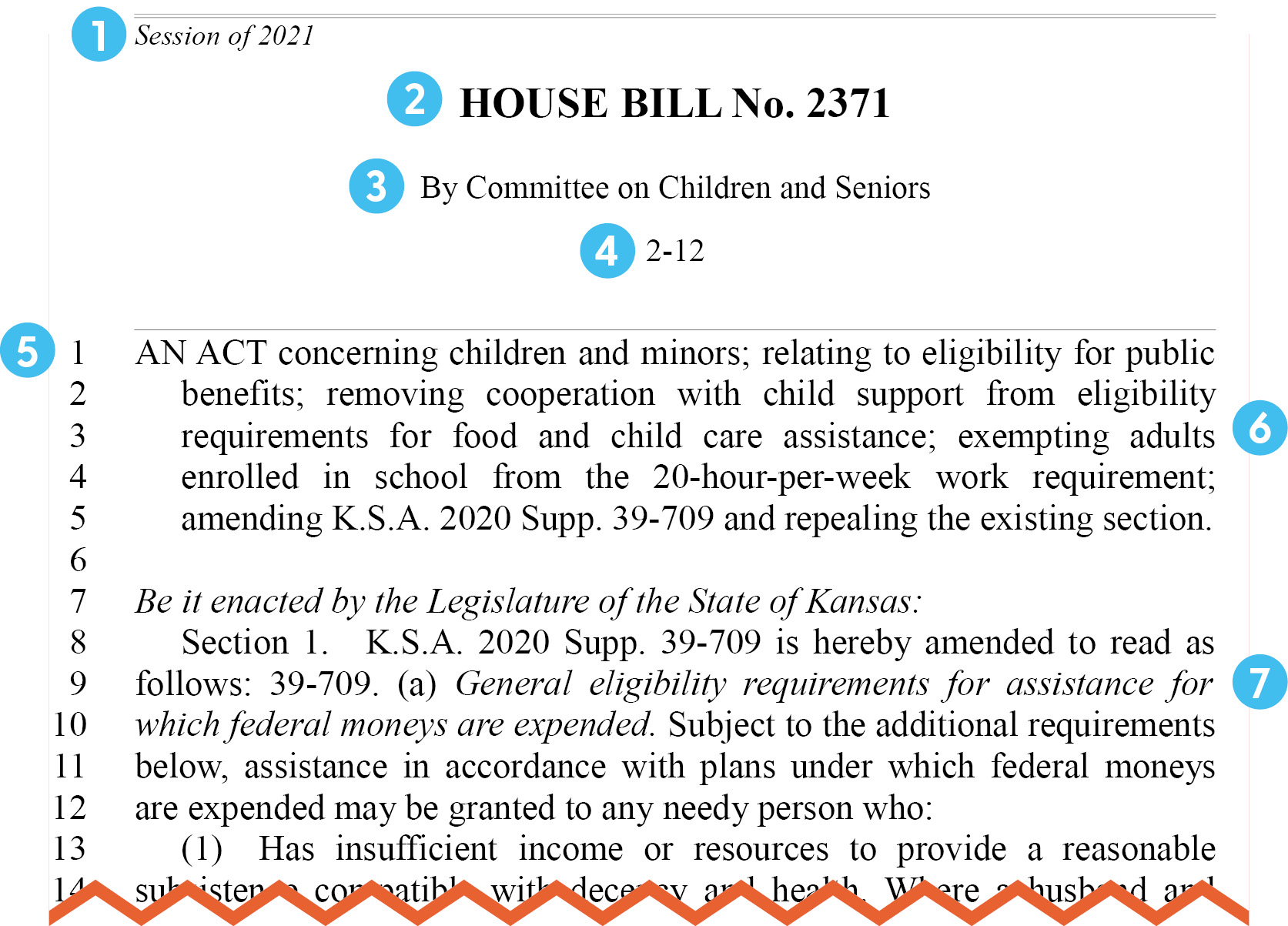 Amendment: A change to the original language in a bill. Can be offered in committee or on the floor of a chamber when it is in the Committee of the Whole.

Bill: A piece of legislation, referred to as HB XXXX or SB X, depending in which chamber it originated. Subject to a veto by the governor. Has the potential to turn into law.

Caucus: A group of legislators organized around a common theme. Can refer to all members of the same chamber and party (e.g. House Republican caucus) or same issue (i.e. Early Learning Caucus) or region (Rural Caucus).

Chamber: Colloquial term that can refer to either the House or the Senate.

Committee of the Whole: When a chamber is in session to debate legislation, all present members (senators or representatives) debate and vote on the bill and any proposed amendments.

Conference Committee: A committee made up of members of both chambers, as determined by the presiding officer of their respective chambers. Typically comprised of the chair, vice-chair, and ranking minority member of the committees that originally considered the legislation.

Conference Committee Report (CCR): The product of a conference committee negotiation. These reports can contain multiple provisions and pieces of legislation on a similar topic. Once created, these reports are sent to each chamber for a vote. CCRs are not subject to amendments and cannot be separated into parts.

Constitutional Amendment: An amendment offered to the Kansas Constitution. It comes in the form of a concurrent resolution and acts similarly, except that these require a two-thirds majority vote in both chambers and are not subject to a gubernatorial veto. To become law, the proposed amendment will be placed on a statewide ballot on which Kansas registered voters can accept or reject.

Floor: Colloquial term that can refer to either the House or the Senate when all members are gathered.

Germaneness: Technical term for relevance; it is the test an amendment must pass before it can be considered for addition to a bill on the floor. An amendment must be germane to the underlying bill in order to receive a vote. Any member can question the germaneness of an amendment and request a ruling of the Rules Committee.

“Gut and Go”: When a chamber replaces the entire contents of one bill with another. This can occur in committee or on the floor of either chamber. This turns a bill into a substitute bill.

Hearing: A meeting of a standing committee for the purpose of gathering information from experts and stakeholders on a bill or topic.

Motion to Refer or Re-refer: An attempt by a representative or senator to remove a bill from the debate calendar of the Committee of the Whole and send it back to a standing committee.

Presiding Officer: The leader of a chamber (Speaker of the House or President of the Senate) or committee (chairperson).

Resolution: A declaration of the sense of one or both chambers. Requires a simple majority of legislators in the corresponding chamber, or both if it is a concurrent or joint resolution. Does not have the potential to turn into law (except for constitutional amendments).

Sine Die: The last day(s) of the legislative session; typically lasts only one day. This time represents the last opportunity for lawmakers to override any outstanding governor's vetoes or pass last-minute legislation before lawmakers officially adjourn for the year.

Substitute Bill: When the entire contents of a bill are removed and replaced by new legislation, this is known as a substitute bill. Typically shortened to H. Sub. or S. Sub., which stand for House substitute and Senate substitute, respectively. This shows which committee or chamber replaced the original content of the bill. Sometimes this happens multiple times. Whichever chamber is listed first is the one that amended the bill most recently. Example — H. Sub. for Sub. SB 273:

Veto: Refers to the governor’s power to prevent a bill from turning into law. May be overridden by a vote of two-thirds of the members of both chambers.