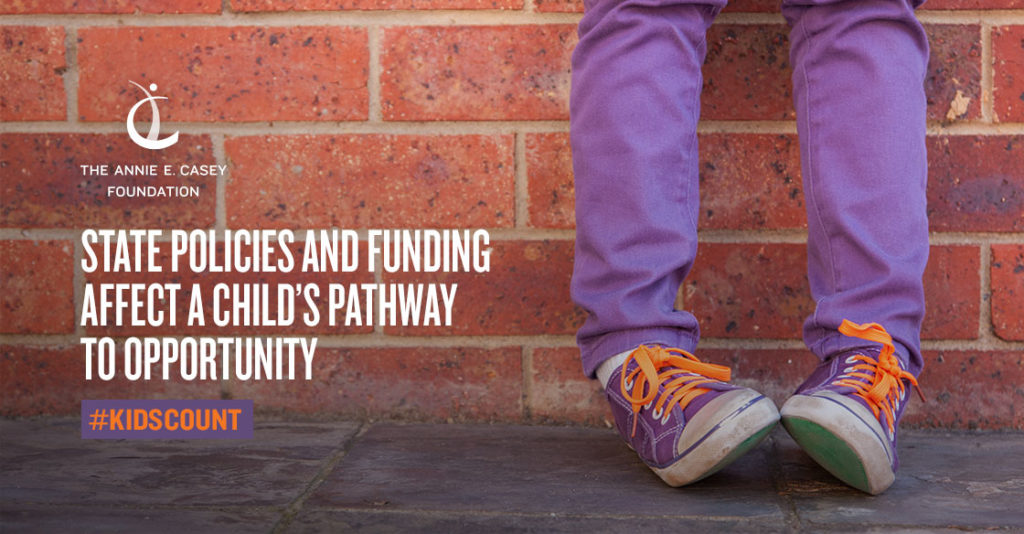 TOPEKA, Kansas — Kansas children are in a strong position, as the state ranks 13th nationally in overall child well-being, but that progress could be at risk with an undercount of the state’s youngest children, according to the 2018 KIDS COUNT® Data Book released today by the Annie E. Casey Foundation.

Despite the strong showing in many areas of child well-being for Kansas kids, much work remains to be done to ensure that positive trends are equitably shared. Complementary research and analysis from Kansas Action for Children (KAC) has shown alarming trends in infant mortality and insurance rates among children of color.

“As the country regains footing from the Great Recession, we’re seeing similar movement here in Kansas, but we cannot afford to stand still” said Annie McKay, KAC president and CEO. “This state’s children need investments that prepare them for the future.”

The Data Book includes much more information than the four domains, though. According to KAC researchers, other information of note includes these changes (all new numbers are from 2016, the most recent data available):

Despite those positive numbers, the percentage of Kansas eighth-graders not proficient in math was 65 percent in 2017, up from 61 percent in 2009. That highlights the continued importance of making education a priority in Kansas, where we have seen repeated court action over school funding. 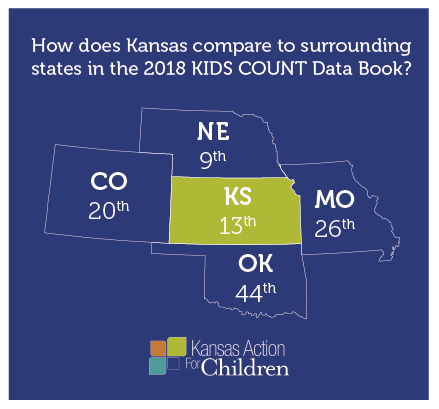 Kansas Action for Children has also been highlighting the importance of race and gender equity across the state. Gains in well-being for Kansas kids and families have not been evenly distributed, with communities of color facing barriers from systemic racism. Disaggregated data briefs and other publications from KAC over the coming year will highlight these challenges.

“All children and families should have pathways to success, and KAC is committed to making sure that happens,” Wilson said. “Information from the Data Book, along with our own analysis, will shape our priorities throughout the year.”

It’s critical, given the needs of Kansas kids, that they be accurately counted in the 2020 U.S. Census. Kansas is in jeopardy of not securing needed federal resources for programs that support child well-being, as research shows 13 percent of children under the age of 5 live in hard-to-count areas. That’s 25,000 kids, many from communities of color and low-income or immigrant families, who would be most harmed by cuts.

With one million young children undercounted nationally in 2010, we are at risk of missing even more in two years. According to the Data Book, some 300 federal programs rely on data derived from the census to distribute $800 billion a year.

“That’s money that goes to helping our state’s children and families — including those who most need it,” Wilson said.

“We will count on children of all races and ethnicities to build America’s future, so the country must count all children in this upcoming census, so we can direct funding to meet their needs,” said Casey Foundation President and CEO Patrick McCarthy.

The 2018 KIDS COUNT® Data Book is available at www.aecf.org. Additional information can be seen at www.aecf.org/databook, which also contains the most recent national, state and local data on hundreds of indicators of child well-being. Journalists interested in creating maps, graphs and rankings in stories about the Data Book can use the KIDS COUNT Data Center at datacenter.kidscount.org.

About Kansas Action for Children

Kansas Action for Children is a nonprofit, nonpartisan organization committed to improving the lives of Kansas children and families by providing comprehensive data, advocating for sound public policy and collaborating with lawmakers. Through support from individuals and private foundations, KAC has worked for nearly 40 years to make our state the best place to live, work and raise a family. Visit www.kac.org to learn more.

About the Annie E. Casey Foundation

The Annie E. Casey Foundation creates a brighter future for the nation’s children by developing solutions to strengthen families, build paths to economic opportunity and transform struggling communities into safer and healthier places to live, work and grow. For more information, visit www.aecf.org. KIDS COUNT® is a registered trademark of the Annie E. Casey Foundation.