Legislative update: An exciting vote to help children and families 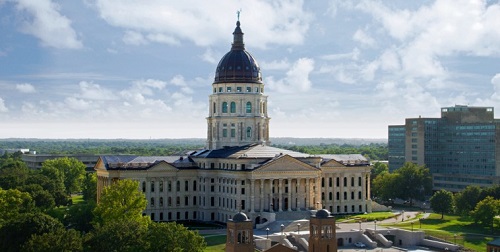 At Kansas Action for Children, the legislative session can sometimes fly by in a blur of committee meetings, floor action, and bill tracking. But every now and then it's worth taking a moment to slow down and mark an important moment. That's what we did this week as a House committee approved an important bill that would expand help for children and their families. We know there's a long road ahead, but we're excited by the opportunity.

You can read more about it below, along with other happenings from Topeka.

On Thursday, the House Committee on Children and Seniors approved HB 2371 with a bipartisan majority. This bill removes a requirement that parents seek child support enforcement before they can access child care assistance or food assistance. It also eliminates the work requirement for those programs for parents who are actively enrolled in an educational program.

At the hearing on Monday, proponents submitted nearly 40 pieces of testimony in favor of the bill. There was one opponent. We thank the committee leadership for holding this vote and supporting this important piece of legislation, and we look forward to working with leadership to allow the full House of Representatives to vote on this bill. (You can watch testimony on the bill here.)

A quick note on the employer child care tax credit: The bill was introduced last week and was given a number on Monday. So, keep an eye on HB 2414 – it should be one to watch!

At the end of week seven – did we FINALLY get a Medicaid expansion bill? Yes, but not quite. The governor’s Medicaid expansion plan was introduced into committee but doesn’t have an assigned bill number, yet, as it hasn’t been introduced on the House floor. We continue to monitor its progress. Meanwhile, the Commonwealth Fund released a short documentary on Medicaid Expansion and rural hospital closures in south-central Kansas.

SB 213 (an employer-related vaccine bill) had its hearing this week (partial video; full audio); KAC submitted opponent testimony. The conversation was concerning, as some senators seemed quite open to the concerns raised by proponents. However, it does not appear this bill will be worked any further in 2021; we're keeping watch.

Finally, both chambers introduced and fast-tracked plans to revise the Kansas Emergency Management Act (HB 2416; SB 273). The Senate version includes problematic language focused on public health emergencies, including taking away authority from local health officers to act quickly (in response to a measles outbreak, for example); the House version does not. With SB 273, there is also an effort to put into statute a definition of “acceptable scientific” evidence for public health emergency decision-making – a terrible idea. Stay tuned as we track these bills.

FISCAL POLICY: SB 22 slumbers, but a replacement could be waiting in the wings

The top three tax tales from this week:

No movement on SB 22, the mega irresponsible tax bill, as it continues to sit tight in the House Taxation Committee, where it isn’t scheduled to be discussed next week. Interestingly, the House Taxation Committee introduced a bill (HB 2421) that looks almost identical to SB 22 before the Senate floor action that saw the inclusion of multiple amendments. KAC will continue to monitor both bills. We're curious to see which bill(s) will be heard in the House Taxation Committee. As a reminder, SB 22 was a bad bill before and after the Senate floor amendments. And KAC will continue to sound the alarm against any proposal that disproportionately benefits high-income Kansans and corporations.

SB 50, one of several proposed bills that would require online marketplace facilitators (think Etsy or Amazon) to collect and remit relevant taxes, was passed out of the Senate Tax Committee. Currently, if you buy something on Amazon that doesn’t charge you tax, you are responsible for remitting the tax yourself when you file. Therefore this bill is not a new tax, but instead would place the responsibility on the marketplace facilitators to collect the tax. While this bill will raise revenue for the state, KAC provided neutral testimony on SB 50 because we are concerned about the de minimus threshold, which would advantage out-of-state businesses over Kansas businesses. We will monitor the bill as it moves to the Senate floor.

Finally, KAC provided proponent testimony Monday morning on HB 2189, a bill that would reform the payday lending industry. KAC is a proud coalition member of Kansans for Payday Loan Reform.

Join the Wichita Birth Justice Society on March 3 for a virtual “Day of Action for Black Moms and Babies.” Access the Facebook event for more information and watch this video to learn more.