The collective prosperity of our state depends on ensuring that children and their families have the resources they need to be economically secure. Children in families with enough income to cover necessities experience better health, academic success, and grow up to earn more as adults.

Unfortunately, for Kansas workers at the bottom of the income scale, federal and state level failure to raise the minimum wage in more than a decade has led to growing inequality and inescapable poverty for children and families across the state. As the cost of living continues to rise, low-income households are forced to make increasingly difficult choices about what basic necessities to sacrifice – whether it be food, a safe living environment, child care, or health care.

As it is, nearly 14 percent – or 97,000 – of Kansas kids are experiencing poverty and 5 percent – or 36,000 - live in high poverty areas. These children are more likely to experience harmful levels of stress, struggle in school, and have health problems than their peers. This is not a problem that can simply be fixed by the hardworking individuals trying to make ends meet. It is a crisis that requires a targeted policy change to raise the minimum wage so Kansas children, their families, and their communities are on a path to success.

Increasing the state’s minimum wage to at least $15 an hour would lift the wages of Kansas workers living below and near poverty and benefit more than 1 in 10 of the state’s children by increasing the earnings of at least one of their parents. Raising the wage floor so that more Kansans earn decent wages would enable families to meet their basic needs and strengthen communities. Raising the minimum wage would reduce the harmful effects of poverty on child well-being and make Kansas a better place for children to grow up.

Regardless of federal action, Kansas lawmakers must take charge and pass legislation to increase the state minimum wage, as 30 states (including neighboring Missouri, Nebraska, and Colorado) have been able to do. They must also remove overreaching restrictions on municipalities choosing to exercise the will of their residents by independently raising their minimum wages to levels that better account for local costs of living.

What It Means to Live on the Minimum Wage in Kansas

Children depend on their parents to provide food, shelter, and clothing, and to continually invest in the resources necessary for a healthy and productive future. However, the reality is that Kansas parents with hourly wages at or near the minimum wage cannot adequately meet these basic needs, even if they are working full time, 52 weeks a year.

The minimum wage in Kansas has not increased since July 2009 when the state matched the federal minimum wage increase. That increase was never tied to inflation, so it has not kept up with the rising cost of goods and services, which continues to climb. In fact, the last time the minimum wage was sufficient to live on was in 1968 when the peak value was equal to $12.12 in today’s money. In June 2022, the inflation-adjusted value of the minimum wage reached its lowest point in 66 years, meaning that minimum wage workers today are actually paid 40 percent less than workers in 1968. 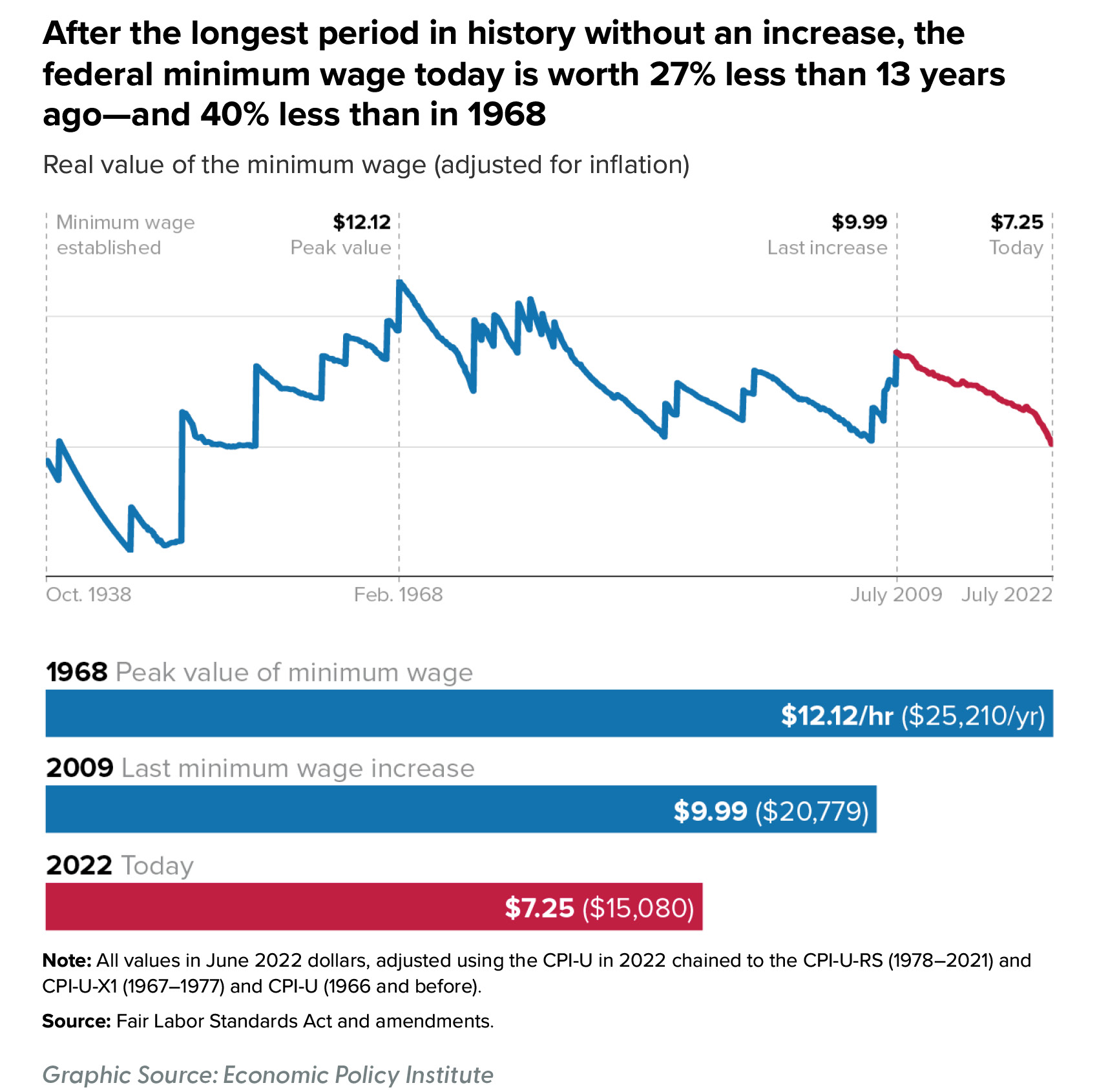 As the minimum wage has remained relatively stagnant for decades, wages for those living on the top end of the income scale have ballooned considerably, creating further income inequality. Between 1979 and 2020:

Low-income families face more economic insecurity regarding necessities like food, child care, health care, and housing now than they ever have. In the first quarter of 2022, just over 14 percent of Kansas households with children didn’t know where their next rent or mortgage payment was coming from and 11 percent did not have enough food to eat. These challenges barely scratch the surface of the immediate and long-term impact low wages and consequent economic instability have on children and families.

The Deep Impact of Economic Insecurity and Poverty

Economic insecurity and poverty have harmful effects on every aspect of life, including physical and mental health and academic performance. Individuals and families with low incomes suffer from worse health outcomes, causing greater likelihood of being diagnosed with high blood pressure, heart diseases, and other chronic illnesses than higher-income households.

There is a well proven link between adverse childhood experiences (ACEs) related to poverty and negative outcomes in all the categories mentioned above. The American Heart Association defines ACEs as “potentially traumatic events, either single, acute events or sustained over time, that have a direct and synergistic impact on health and well-being throughout the life course, contributing to many of the leading causes of morbidity and mortality in the U.S.”

Income supports, such as Temporary Assistance for Needy Families (TANF) and the Earned Income Tax Credit (EITC), are proven anti-poverty programs that help families by supplementing wages. Such programs directly improve the health and lives of children and families by boosting income (especially when delivered monthly to cover expenses throughout the year), but they must be met with increased base wages to make a lasting difference where families are not at risk of slipping back into poverty.

Impact of Raising the Minimum Wage

A minimum wage increase would benefit all household types, but especially single adults with no children, who make up about 36 percent of the state’s workforce. They would represent more than half (53 percent) of those directly or indirectly impacted by a minimum wage increase. An income that better reflects the cost of living could greatly help workers wanting to start families who may have chosen to delay having children because of the rising costs of all goods and services, particularly quality child care and housing.

This increase could help Kansas retain and attract young adults before they (along with their talents and potential) are lured to states with better wage provisions. For the almost two-fifths of the total workforce in married and single parent households with children, a wage increase would significantly improve each family’s ability to provide better nutrition, health and education support for their children.

Minimum wage jobs are also not just for teenagers gaining their first work experience after school. In fact, only 5 percent of the state’s workforce is age 19 or younger. Low-paying jobs are mostly held by adults trying to support themselves and their families working the essential yet often underpaid jobs that keep our society and economy running. The majority (89 percent) of low-wage workers who will be helped by a minimum wage increase are 20 or older, with 33 percent being older than 40.

For young adults making important career and education choices, as well as others looking to raise children in Kansas, an increase could help pay for higher education or vocational training, or the high cost that comes with raising children, especially for quality child care and health care. For the 15 percent of low-wage workers who are age 55 and older, the increase could supplement retirement incomes and cover medical and elder care costs in later years, allowing them comfort and dignity as they age.

Benefits for Local Businesses and Economies

Raising the minimum wage is a sensible change that will benefit not only individuals and families, but also businesses and the state’s economy.

Multiple economic studies (like here and here) have shown the positive effect of wage increases on urban and rural counties. Higher wages translate to workers who are more likely to stay with their employer, decreasing employee turnover and the costs associated with recruiting and training. Increasing the minimum wage also contributes to improved morale, fewer absences, and better performance.

While increased wages will lead to slightly higher prices, the increase will be cancelled out as all businesses or services in an impacted area will increase their prices in similar ways. A California study found that in businesses like restaurants, a 10 percent minimum wage increase can be absorbed by increasing prices by only 1 or 2 percent. As wages increase, so will the spending capacity of families being paid more. Low-income households tend to spend most of what they earn to meet basic needs (as opposed to saving or investing) so that money will quickly circulate in their communities as they buy more goods and services.

There is a large body of economic research examining the practical effects of minimum wage increases that finds that raising the minimum wage has little, if any, effect on employment levels. In areas that have increased the minimum wage, overall job growth tends to hold steady while workers earn more and are lifted out of poverty.

Turning toward a Minimum Wage

As advocates and policymakers across the country work to improve the wages of the lowest paid workers, the focus has increasingly shifted from simply achieving a higher minimum wage to guaranteeing that it is a true living wage.

The federal poverty threshold that is used as the official measure of poverty considers only a very basic food budget and excludes complete information for other costs, such as housing, transportation, health care, and child care. It also does not consider that different areas of the country are more expensive and require a higher income to survive, let alone thrive. A living wage, such as that used in the MIT Living Wage Calculator, incorporates food, child care, health insurance, housing, transportation, personal care items, and clothing within the context of a local economy to produce a more accurate measure of how much a family really needs to lead their best lives.

Under a living wage model, a one parent, one child household would need an annual income of $68,058, which translates into an hourly wage of $32.72 – five and a half times the current minimum wage of $7.25. Even if the parent worked more than one minimum wage job, that income is unattainable. 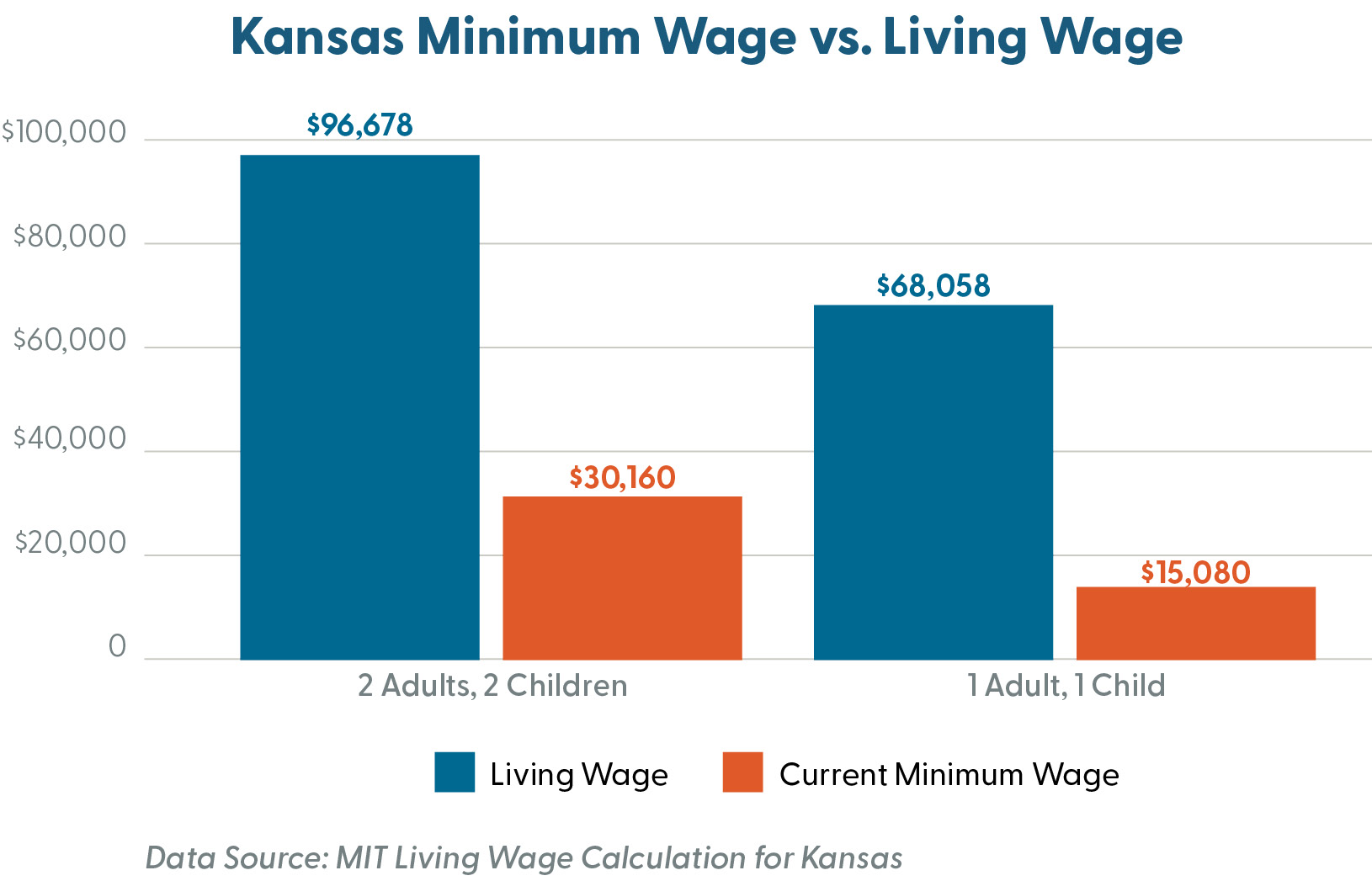 As states try to better account for what is needed reasonably to survive, more are including in their wage policies (13 states plus Washington D.C. so far) measures to tie their minimum wages to inflation so that the base income will automatically adjust as cost of living rises. Such provisions work better to maintain the value of wages and are crucial for low-income households when inflation causes food, housing, transportation, and energy costs to rise.

An automatic inflation adjustment also creates a faster and simpler process to keep the minimum wage on par with costs, protecting it from political and bureaucratic delays.

Kansas lawmakers have the power and opportunity to change the course of generations of Kansans’ lives. With major steps being taken to draw large businesses and investments to the state, we can make the Sunflower State the best place to live, work, and raise a family by adopting the following recommendations:

Kansas has managed to rebound from the COVID-19 pandemic, regaining lost jobs and seeing some gains in wages. But for those on the lowest end of the income scale, support to rise or stay out of poverty have lessened as temporary federal lifelines have ended. The continued decline in the real value of the minimum wage can be mitigated by Kansas lawmakers exercising their power to help the most in need among us. Most low-wage workers who would benefit from an increased minimum wage are adults working full time whose incomes are vital to their households. This attainable policy goal will also improve the state’s overall well-being and give children and families better opportunities to thrive.