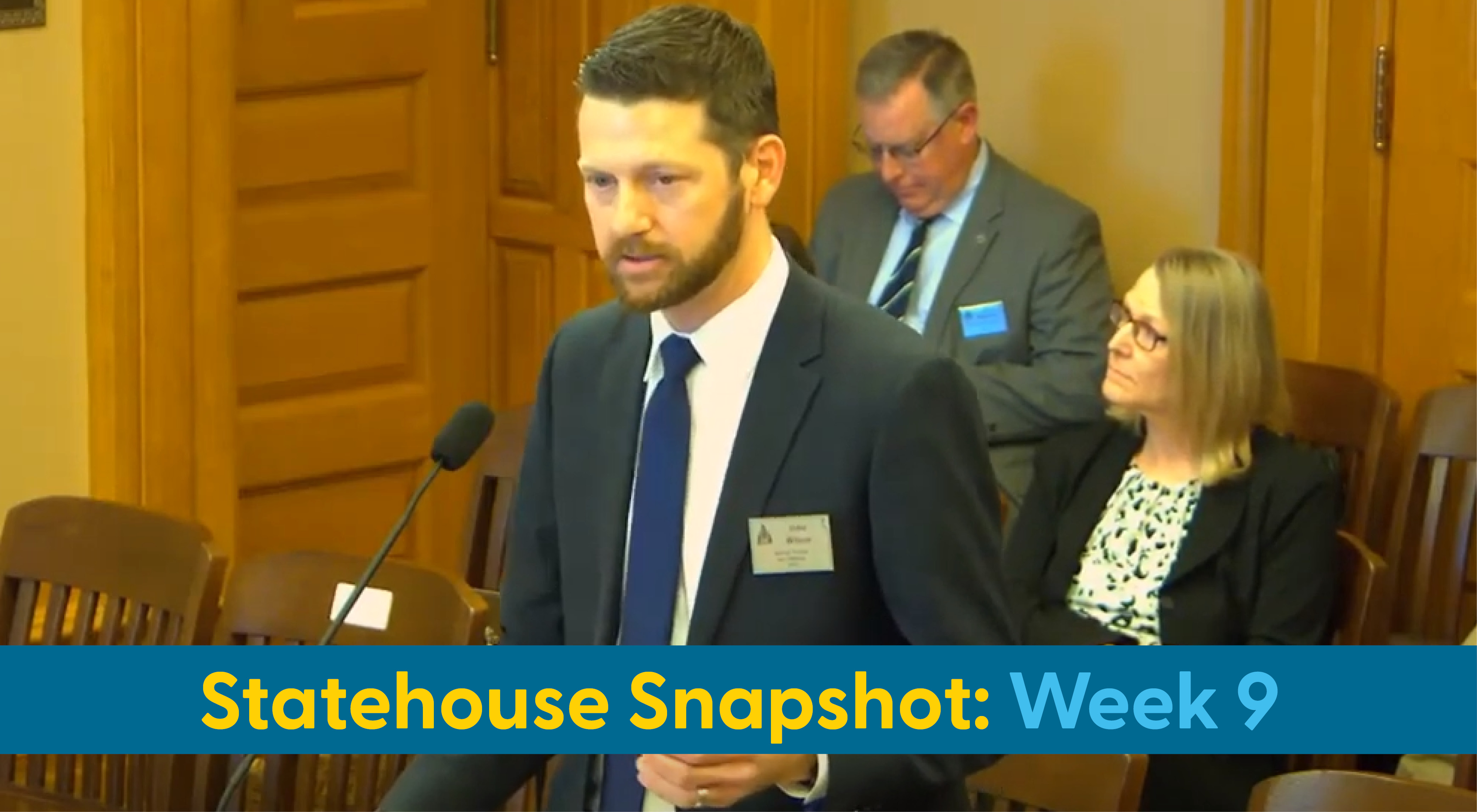 SPECIAL THANKS TO PARTNERS

This week, the KAC team advocated, offered testimony, and strategized on many different pieces of legislation across multiple committees in both chambers of the Legislature. But we were far from alone! Partners and allies representing diverse communities, sectors, and issues have been working together all session to coordinate efforts to advocate for Kansas kids, families, and communities. Since the start of the legislative session in January, KAC has worked with other organizations and agencies to submit more than 100 pieces of written or verbal testimony!

Weeks like this one can be tough, as we seem to be fighting against one harmful piece of legislation after another. But partners from anti-poverty organizations, agencies working to address food insecurity, health care advocates, faith leaders, grassroots mobilizers to social service providers, early learning experts, and advocates for child welfare and survivors of violence are working together to champion—or defeat—policies that impact Kansas families.

Kansas Action for Children is thankful for the hard work of all our partners and allies. By working together, we can make our state a better place for kids.

SB 501, a bill that would create significant barriers to access the Kansas food assistance and Medicaid programs, had a hearing Thursday in the Senate Health Committee. There were only two proponents, one of whom testified virtually from Maine and represents a Florida-based organization. KAC was pleased to see 40 pieces of opponent testimony, including many of our partners who braved the snow to testify in person.

KAC President and CEO John Wilson presented opponent testimony (listen here), sharing with the committee how SB 501 would harm Kansans, as well as how the bill would quickly and expensively expand state government bureaucracy and create inefficiency.

Representatives of hospitals, food banks, and other advocacy organizations all shared concerns with how burdensome the bill’s changes would be for Kansans facing financial instability, particularly those dealing with multiple crises at once, such as a single mom facing a family death or someone restabilizing after leaving an abusive relationship.

Take a moment to listen to powerful testimony from Karen Siebert of Harvesters regarding this harmful legislation: “The folks that run these pantries...serve their communities and their neighbors tirelessly... But even they can’t take five loaves and two fishes and feed 5,000.”

Despite Kansans already having to overcome burdensome restrictions to receive the help they need (largely due to legislation passed several years ago), lawmakers want to make it more difficult for Kansas families. We hope senators will consider all the in-state advocates who testified against this harmful bill instead of out-of-state big money lobbyists.

KAC presented testimony in opposition to SCR 1620, which would put a constitutional amendment on the ballot that would require a supermajority of the Legislature to vote for any new tax or tax increases. This may sound like a good idea – until you dig into the consequences of such a proposal.

No other policy area has a legislative supermajority requirement, and other states have experienced negative consequences in the years following the implementation of similar restrictions. We urged the Senate Tax Committee to reject SCR 1620 so the Legislature retains current processes for passing legislation related to revenue. Unfortunately, the same day, despite outstanding questions around the definition of what constitutes a tax increase, the Committee reconvened to vote SCR 1620 out of Committee. We will continue to urge the Senate chamber to reject this short-sighted measure.

Next week, we anticipate the same committee will hold a hearing on SB 328, a “flat tax” policy that proposes every worker in the state pay the same percentage on their earnings, regardless of their income levels. We have concerns with these one-size-fits-all proposals and believe a progressive income tax structure is the fairest way to structure income taxes.

ANOTHER WEEK OF ATTACKS ON COMMUNITY HEALTH PROTECTIONS

As the Senate Committee on Ways and Means finalized the budget, committee members defeated a proposal to shorten Medicaid postpartum coverage for pregnant women from the proposed 12 months to eight months. We support this important proposal remaining at 12 months of coverage, as it will help the health of both the mother and baby.

Rumors became reality this week in Topeka, as the House K-12 Education Budget Committee started work on the funding for public schools. As she had previously indicated, Chairwoman Williams and several colleagues on the Committee removed all school funding from the main state budget bill and placed it in HB 2512. That is one of four bundled bills containing multiple policy provisions and could be the vehicle for the entire education package. We will know next week, as the Committee is expected to advance its final proposal on Monday.

The Committee also considered a motion to remove funding for early childhood education. Rep. Penn proposed deleting a transfer from the Children’s Initiatives Fund (CIF) that currently goes to support the StartYoung program in Wyandotte County. StartYoung supports parents and early childhood educators by providing direct financial assistance to help families navigate Kansas’ child care system. We need more investment in child care and early learning, not less, and we strongly oppose any move to strip funding for critical supports for the youngest Kansans and the providers who care for them.

As if the House action wasn’t enough, the Senate Education Committee advanced two of their own bad bills: SB 496, the Senate version of the so-called “Parents’ Bill of Rights,” and SB 484, the latest reincarnation of a multi-year effort to prohibit transgender students from playing on school teams that align with their gender. KAC provided written opponent testimony from our President and CEO, John Wilson.

There is good news to report on the employer child care tax credit. Sen. Sykes offered an amendment to attach the credit (found in SB 263) to HB 2237, an expansion of the Rural Opportunity Zone program. KAC will provide testimony on the credit to the House Financial Institutions and Rural Development Committee on Monday, although we anticipate the bill will be sent to a conference committee later in the week.

WHAT TO EXPECT IN WEEK 10

As lawmakers approach more session deadlines in the coming weeks, they will be in a hurry to push through several policies before their April break. This next week, KAC will submit the following testimony:

Policies likely to see movement next week include:

It will be a busy week, so make sure to follow us on Twitter @kansasaction for updates throughout the week.