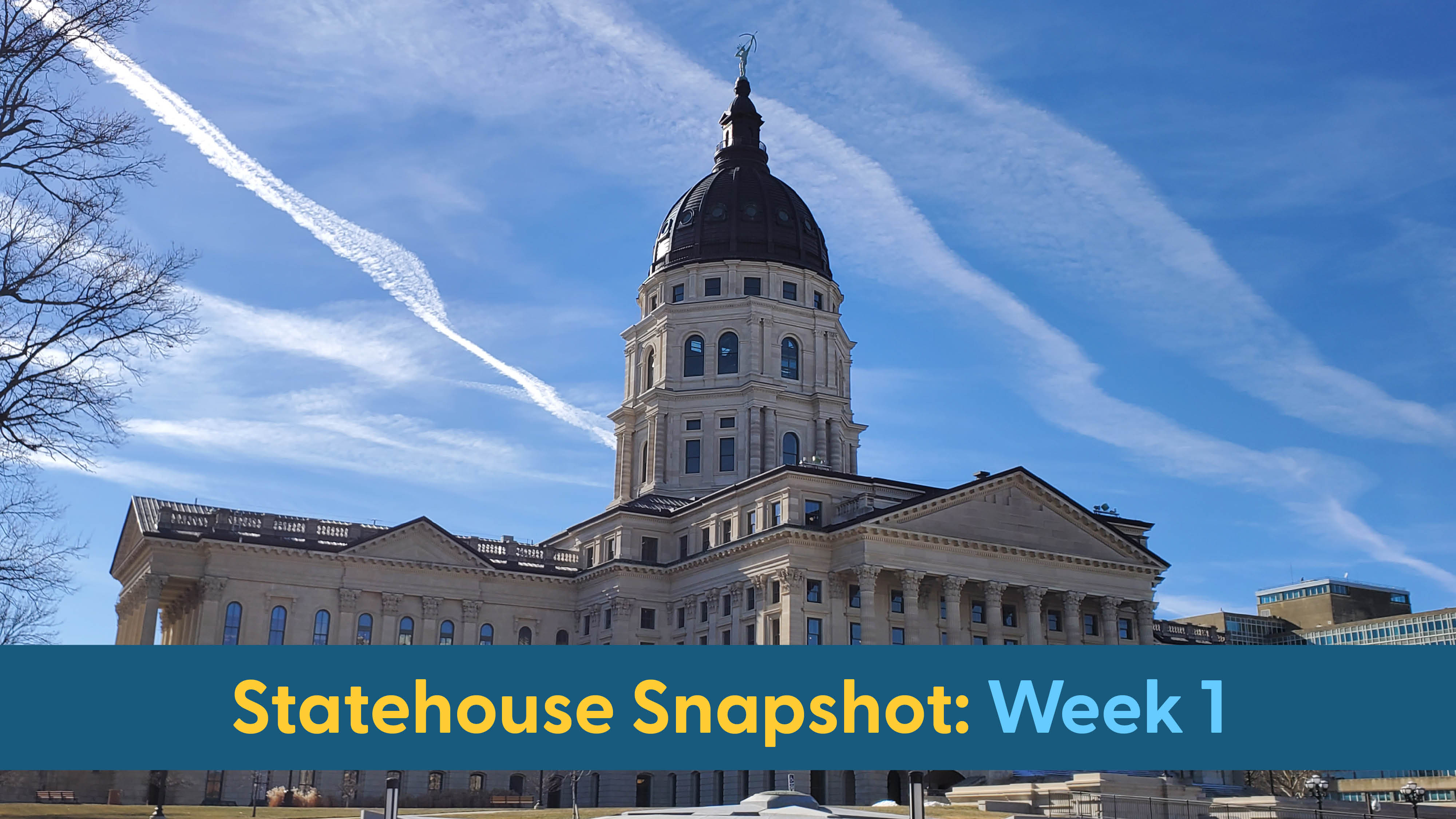 Lawmakers filed into Topeka on Monday for the start of the 2022 Session. Overall, it was a quiet first week, with only a handful of bills introduced in the Senate and House before those chambers adjourned until Tuesday. Four of those bills—two in each chamber—deal with eliminating the state sales tax on food. A hearing for SB 339 is set for Wednesday. [Update: Hearing postponed.] Hundreds of organizations and individuals have voiced their support for this change, and KAC will be working with partners in the coming weeks to see it through the legislative process.

KAC staff had an active presence under the dome throughout the week. On Monday, staff dropped off folders containing information on KAC and its priorities for the year, as well as policy documents and our letter to legislative leadership urging elimination of the state-level food sales tax. KAC staff, too, were present in multiple committees listening to lawmakers and conferees and even providing our own testimony on child care.

STATE OF THE STATE

Governor Kelly’s State of the State address can be summed up in one word: growth. In recent years, Kansas has repaired our unfair tax system and the resulting budget shortfalls, but there is still much work left to accomplish.

In her speech, the governor called on the Legislature to prioritize eliminating the state food sales tax, expand KanCare, and put $600 million into the rainy day fund.

State budget estimates have predicted a historic ending balance for the state, and the 2022 session will be defined by how the Kansas Legislature spends this surplus money. The state can afford to prioritize the needs of kids and families, but only if the Kansas Legislature refrains from adding expensive, unnecessary items that only serve the wealthy and well-connected. KAC is eager to work alongside lawmakers to pass much-needed responsible fiscal investments that will benefit Kansas kids.

KAC Early Learning Policy Advisor Mitch Rucker provided informational testimony to the House Committee on Children and Seniors, detailing why the state should address the child care crisis many are currently facing. As Mitch puts it:

“If providers increase their prices, families won’t be able to afford care. If families can’t afford care, caregivers won’t be able to work or support their families. At the same time, the rising costs of running a child care business mean the people Kansans entrust to care for their children are often making minimum wage or slightly more. That means fewer and fewer people enter the early learning field and more providers close. Meanwhile, children are left without access to high-quality child care and the lifelong benefits associated with it.”

Take a listen here. Mitch’s testimony begins at the 2:25 mark.

The proposal will correct longstanding concerns such as:

Once again, the governor has proposed expanding KanCare, which will provide health care for 150,000 Kansans while taking advantage of federal incentives to reduce the overall cost to the state.

Given the revenue surplus and to address the urgent and ongoing basic needs of Kansans, the governor proposed tax changes including the elimination of the state food sales tax and a one-time direct tax rebate. The proposal also provides funding to make higher education more affordable by freezing tuition for one year.

Kansas Action for Children advocates for equitable tax and budget policies, which prioritize ensuring opportunity and stability for all Kansas families. We will be releasing a more detailed analysis of the budget in February, examining how the budget addresses the needs of low-income families and improves the health and well-being of children and families, and how the lawmakers can support these efforts.

Going into the 2022 Session, two interim committees (the Bob Bethell Joint Committee on Home and Community Based Services and KanCare Oversight and the 2021 Special Committee on Kansas Mental Health Modernization and Reform) officially recommended extending KanCare coverage for new mothers from 60 days to 12 months after birth. The change would impact many Kansas mothers and ensure they have the health care they need during such a critical time. In her proposed budget, Governor Kelly included this change, and KAC is eager to see the policy made permanent this session.

WHAT TO EXPECT NEXT WEEK

As the session starts to heat up, we’ll see more committees hold hearings on both high- and low-level priority bills. On Wednesday next week, SB 339 will have a hearing in Senate Tax – it’s one of the recently introduced bills on food sales tax. [Update: Hearing postponed.] KAC is intrigued to see what, exactly, the Committee will do with the policy proposal and if any risky amendments get added by lawmakers. We encourage supporters with lawmakers on the Senate or House committees to call or email them and express your thoughts on ending the state food sales tax.

In Senate Health on Thursday, there is a hearing on SB 42, which would improve the maternal mortality review committee process. Contact Heather Braum ([email protected]) if you are interested in learning more about this bill.